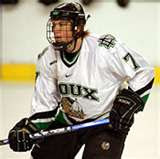 Watched my first live NCAA hockey this weekend, and have to say I was pretty impressed with everything. For a guy who grew up watching the WHL, it seemed like a whole different world.

Both games were a party like atmosphere, with the crowd getting into it from helping the PA dude announce the goal, to thanking him for telling them they're team was at full strength. Then there's the student band, and of course, the nicest arena I've ever been in. Everthing I had heard about Ralph Engelstad Arena didn't do it justice...it was amazing. The Sioux also have the best training facilities and dressing room in the league, which is better than most NHL team set ups.

As for the on ice quality, North Dakota is number 2 in the country for a reason. They haven't lost in 13 games, and dismantled a decent Bemidji team that is leading the CHA 5-1 on Saturday. The Sioux power play scored 4 times and made passes with pin point accuracy. Leading the way for UND Saturday was power forward Chris Vande Velde. The Oilers 4th round pick from 2005 notched 3 points and was a force all game. Not to be outdone, fellow 05 pick Taylor Chorney quarterbacked the power play and never looked rattled.

The game on Sunday was much closer and more entertaining. UND couldn't solve the Beavers until very late, and held on for 1-0 lead. The winning goal was set up by St. Louis first round pick T.J Oshie (picture courtesy UND), who was incredible all weekend. He's not the fastest skater I've ever seen, but he does pretty much everything with speed and isn't shy on throwing his body around.

As for Bemidji, while they haven't beaten UND since 1970, they proved on Sunday they won't be a cake walk should the two teams meet in the NCAA tournament, something that could likely happen. I was most impressed with goaltender Matt Clime. He's an undrafted senior who should get a contract at seasons end. Up front, sophmore Joey Moggach didn't see a lot of ice time in the first game, he got better and better on Sunday and was one of the few Beavers to throw a few hits, which in turn created turnovers and chances for the visitors.

All in all, a great weekend of hockey, in a city of 50,000 that goes bannana's for their hockey team.

I would highly recommend checking out the fighting Sioux at home if you get the chance, it's well worth the drive.
Posted by Dean Millard @ 12:39 AM

I was most impressed with goaltender Matt Clime. He's an undrafted senior who should get a contract at seasons end

North Dakota’s JP Lamoureux is also undrafted. With the Oiler’s Glenn Fisher seemingly going nowhere, should they look at one of these two?

Do the Oilers watch these undrafted, older NCAA guys? There’s a group of them at the top of NCAA scoring – less goals than Whitmore, but more points. Any way of identifying potential keepers in that group?