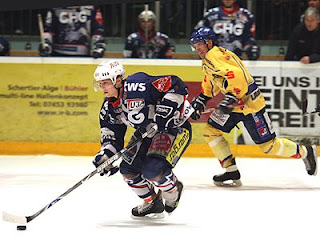 One thing that has always bugged me is the way NHL teams can hold onto the rights of NCAA players until they're graduated but for CHL players it's decision time after just 2 years from draft day.

Does anyone know the reason for this? Honestly, I'm asking because I don't. It just makes zero sense to me.

You draft a 17 year old from Moose Jaw who is playing in the WHL for Kamloops and by the time he's 19 you have to decide whether or not he's worth offering a contract to. On the other hand, if that same kid at 17 was playing for the Notre Dame Hounds while waiting to join the Denver Pioneers as a 19-year-old freshman, the NHL club wouldn't have to even think about him until he'd graduated at the age of 23.

19 if you play Major Junior in Canada... 23 if you play NCAA in the States. Same kid, two completely different situations.

What if that 17 year old has a major shoulder injury as an 18-year-old and spends his 19-year-old season getting back into form but only puts up 50 points for the Blazers? That's probably a kid that doesn't get an offer from his NHL team (just ask Eric Hunter).

Meanwhile, in the other scenario, that same kid has 4 more years to get back into top form before he has to worry about getting dumped by the NHL team that drafted him. Hell, at 18, his college career hasn't even begun yet, he's still playing in the SJHL or the BCHL or maybe stateside in the USHL. (see Oiler draft pick Robby Dee)

What about the classic late bloomer who doesn't hit his stride until he's 20, or 22 for that matter? How many guys do you see not getting drafted but get signed as a 20-year-old free agent at the end of their CHL career or as a undrafted NCAA grad?

If I were boss of the world, NHL teams would be able to keep the rights to their CHL players until their eligibility was up and then even beyond that provided the player in question is committed to enrolling and playing for a CIS program.

Canadian Universities have outstanding scholarship programs; the WHL is the biggest contributor to scholarships in Western Canada, and most of the players playing in the Canada West Conference of CIS hockey now have WHL backgrounds. Many of those players were drafted as 17 or 18-year-olds but never signed once their CHL eligibility expired.

Every year I get told by NHL scouts that CIS hockey is the best kept secret in the hockey world and that several players across the country could play at the AHL level, if not higher.

My solution would see many of the players skating for the Alberta Golden Bears, the Saskatchewan Huskies, the Acadia Axemen, etc still with the ties to the NHL teams that drafted them. It would give those players a longer opportunity to realize their dreams, the NHL teams a longer period of time to wait for development of late bloomers and it just might encourage more 20-year-old CHL grads to continue with their education while playing hockey.

By the way, the guy in the picture is Ben Thomson. This is a guy who was 5 years ahead of his time. In a world where mini-mights like Patrick Kane are not only NOT overlooked at the draft but selected 1st overall despite being 5'8 and 160 lbs... Ben Thomson wasn't even considered a potential prospect. His 3 consecutive +70 point, +30 goal seasons deemed unworthy of recognition because they were achieved by a player outweighed by many bantam players.

After his impressive years with the Medicine Hat Tigers, Thomson joined the University of Alberta Golden Bears where he continued to shine scoring well over a point per game in each of his 3 seasons. In the National title game Thomson scored the tying goal in the dying seconds and then the overtime winner to give Alberta it's record setting victory.

From Alberta it was on to the AHL where Thomson caught on with the Houston Aeros, a team coached by his former Alberta bench boss Rob Daum. 22 points in 47 games as a rookie should be considered a success but with Daum leaving the team, so did Thomson's chances and it was off to Europe for 2007-08.

The German 2nd division is a far cry from the best European leagues but 41 points in 27 games should be enough to impress anyone.

Why use Thomson as my example? As a 20 year old coming off the final outstanding year with Medicine Hat, a NHL team should have been able to "draft" or "list" Thomson because he was headed to play CIS hockey with Alberta. That would have given him the opportunity to attend a NHL camp each fall, compete for a pro job and safely return to school should he fail to get one knowing that the opportunity would be there again next fall.

The only down side that I can see to this idea is that NHL teams are only allowed to have 80 names on their protected list, 50 of which are under contract. But if it meant expanding that 80 to 85 or 90... what would be the harm in that?

No really... I'm asking. Am I off base here or does this not make sense for everyone involved? NHL teams benefit, the players benefit, CIS hockey benefits... who doesn't?
Posted by Guy Flaming @ 10:27 PM

From the little I know, NCAA players aren't even allowed to negotiate a professional contract. Doing so voids their amateur eligibility. I think this is the reason that American Collegiate athletes are exempt from the "sign by 19" rule. Yes, it does make no sense, but trying to alter the NCAA's thinking process would be like talking to a brick wall, considering it is the same ruling across the board. Hockey, Baseball, Basketball, Football; all have the same rulings, in fact some have even stricter stipulations. Take Football for example, if a player decides he wants out of College before his senior year, he must do so BEFORE entering the draft, and without anything but speculation as to where he would go if he opted out. It's not that the NHL has stupid rules, it's that the NCAA trumps professional. Seemingly everytime.

In regards to your suggestion, While it is a good idea in theory, you hit the nail on the head regarding the 50 contract problem. Most teams can't afford to wait until a 7th rounder is 22 to judge his talent level. Also, by that time, these prospects will have likely been lapped by 3-4 years of drafted prospects younger and more talented.

Some great food for thought mind you.

You're right, altering the way the NCAA does things is probably an exercise in futility but that's why I think the NHL should change instead.

What I think my change would do is enable NHL teams to draft guys they might not normally, the small guys like Ben Thomson, just with the thought process being they have the ability to wait longer to judge. Clearly, playing against NHL sized players (not skill but size) in CIS and AHL has proven he can survive the contact.

Thanks Guy. I think in this type of situation you look at what a good AHL farm club can do for you. This is what separates good organizations from poor, and that's player procurement out of the AHL, and my hometown Manitoba Moose currently seem to be the posterchild for it. You look at the names of players like Alex Burrows, Rick Rypien, Jason Jaffray, these are kids that have gone through WHL hockey, been offered an AHL contract by the Moose, and have played their asses off to make it to the big show. All three went undrafted, all three are now playing in the NHL thanks to great minor scouting on the Moose's part. As a heads up, look for the names of Max Fortunus and Alex Bolduc in the near future, they're bursting at the seams for the Moose.

I think this is the best situation in terms of your suggestions. A partnership with a great AHL club could effectively wrap around the two year rule. If an NHL club sees a recent CHL grad they like, but don't have the contract space, the AHL club could sign them to an AHL entry-contract. I am led to believe these are also three-year pacts. Gives the big club an extra 3 years of time to make a more educated decision.

could altering the age that players are drafted be some sort of solution????

I'd be down with a 20 year old draft. Less guess work on how players will turn out.

The NHLPA won't go for it though.