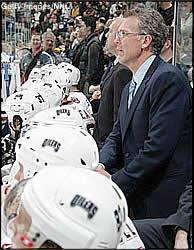 First and foremost, let me make this clear that what you are about to read is pure speculation on my part. It's hypothetical. It's more of a "Hmmm... I wonder if this could actually make sense and work out like this" sort of a thing.

It started with listening to Total Sports (local radio show that airs on TEAM 1260 daily from 3-6 PM). Last Friday TS was guest hosted by Corey Graham and Ryan Rishaug from TSN. A caller asked why the Oilers don't hire a young up-and-coming coach, groom him and have him step in to replace MacT who he felt had overstayed his welcome (the caller's opinion, not mine or the show's hosts).

That got me thinking... Edmonton actually has such a guy in the system RIGHT NOW.

The Oilers hired Bucky to take over the bench of the AHL squad when Geoff Ward was hired away by the Boston Bruins. Bucky had just 1 year of experience behind the bench, that one spent during the lockout with the Edmonton Road Runners. The decision raised some eyebrows and had critics citing "he old boy's club" getting their man in a former blood-and-guts Oiler.

For the most part, those I speak with about the farm like the job Bucky has done with the Falcons. There are some who feel the systems are a little restrictive and lack offensive creativity but credit where it's due... Bucky has his club in a playoff position despite the "simplistic" strategies he has instilled.

On the NHL side, the Oilers are heading to an early golf season again and some fans are screaming for a change. I personally don't believe that Craig MacTavish is headed anywhere unless it's higher in the organization and that with the new ownership and the injury situation killing the team for the second year in a row, he probably doesn't get fingered as the reason for the team's futility in the standings.

In my opinion, Huddy has done a fantastic job with the blueliners on the team. Gilbert has surpassed expectations, Greene continues to get better and better, Smid and Grebeshkov still have flaws but show steady improvement. Huddy is a keeper.

I'm far from an insider as to which coach is responsible for what but my impression is that Billy Moores is a tactics guy. He's incredibly personable and has a wealth of accolades from his pre-Oiler days at the UofA. I see no reason to question his value to the Oilers.

I really like Rob Daum as well but I wonder why it was a 1-year deal for him though. He's basically scouting the opposition, devising ways to pick apart their systems and I have no reason to think he's anything but good at that job although to me, it seems like a bit like taking a racehorse for a leisurely trot; he's got more to offer than that.

And the 1-year deal bugs me like that itch in the middle of your back that you can never reach. Why 1 year?

Is it a temporary thing? Are they test driving Daum or is he just a stop-gap until someone on the farm is ready for a promotion?

What if... and here's the specualtion... WHAT IF Kelly Buchberger is promoted to the NHL bench next year? I know, it's been speculated before so I know I'm not the first guy. BUT, thinking back to the caller's comment on Total Sports, Bucky is NOT the young "hotshot coach" I wonder about being on the fast track. What if promoting Bucky clears the path for the real coach of the future?

I wonder if it's actually Jeff Truitt.

Here's Truitt's bio from the Falcon's official website: "Truitt joins the Falcons following an outstanding junior coaching career with the Kelowna Rockets... after seven seasons on the coaching staff, including the last three as head coach. Truitt joined the Rockets in 2000-01 as an assistant coach with former Oiler Marc Habscheid before becoming the head coach in 2004-05.

Prior to joining Kelowna, he served as an assistant coach with the WHL’s Lethbridge Hurricanes and was the head coach of the Camrose Kodiaks for their first three seasons in the AJHL. While with Camrose, he was co-coach of the AJHL All-Star Selects, finishing second at the 2000 Viking Cup tournament.

Truitt also has international coaching experience with Team Canada. He served as video coach for the silver medal winning 2004 Canadian National Junior Team, was an assistant coach with Canada’s gold medal winning Under-18 Team in August 2006 in Slovakia and the Czech Republic, and most recently, he was an assistant coach with Canada’s World Under-18 team that placed fourth at the 2007 world tournament in Finland."

If you want a young up-and-coming coach... who better than a guy with a resume like that? Truitt is 42-years-old and I think could be the AHL coach next year and quite possibly, the guy to replace Craig MacTavish when his current contract runs out in a couple of seasons.

Am I crazy or does that make sense... and would Oiler fans be OK with that?
Posted by Guy Flaming @ 9:19 AM

I think MacT has done a decent job this year and an amazing job in the 2006 finals but it may very well be time for change. I'd also like to see a GM committee of KLo, Doug Armstrong, MacT and a lawyer/salary guy.

Promoting a young coach is a move the Oilers can afford to risk. If Truit backfired, Tavares is waiting in the wings. Our PP has been brutal since forever and instilling some young blood could be just what this team needs.

I wasn't suggesting Truitt for 2008-09 but rather for when MacT's current contract expires.

What about Ron Low? He's now availible after being fired by Ottawa today.

Regarding your question about why Daum only recieved a 1 year contract.

I may be mistaken but I think he took a leave of absence from the U of A that expires at the end of this season. Therefore he was kind of in an odd position of not being able to sign long term without losing his safety net to fall back on. Considering the duties he currently holds with the Oilers you can kind of see why he would want to test drive the position for a year before giving up his option to return to the U of A.

At any rate I am sure Stauffer could confirm of you don't get a chance to ask Daum himself.

Interesting posting. Could there really be as much forethought around succession and development among Oiler coaches as with the players?!
I vaguely recall the press release when Truitt was brought on board and remember noting all the Oiler connection (Habschied, etc.), but knew nothing of his other WINNING exploits.
If the Oil can build a solid development system (pipeline, so-to-speak) based on both coaches and players, one could theoretically think they may just be an organisation to be reckonded with in the future.
And only a year ago, we hadn't even a farm team. I suddenly feel like my swaying tree in the storm may actually have some roots!

What is Habscheid up to these days? I used to think he was the guy they were going to groom.

Habscheid isn't coaching this year as far as I can tell.

That is what I assumed since I am sure he is making more money sitting at home on his first NHL contract than he could make working somewhere else this year. Any chance the Oilers would be interested in hiring him in some capacity? I always thought he was a guy worth grooming.

From what I've been told Habscheid was offered Rob Daum's job, but turned it down. Might not have made the Oilers to happy.

Thanks, Dean. I can see that. I've kind of kept tabs on him just because I once heard Sather say that Habschied was the player he had the most regrets about. He thought he ruined him for the NHL by rushing him.

I still think the Oilers should try and bring him back into the organization and groom him but I can't remember how many years the Bruins gave him on his contract.

Catch up with Habby. He is taking a break - but it won't be a long one, I can tell you that.