Be Cruel to Your School 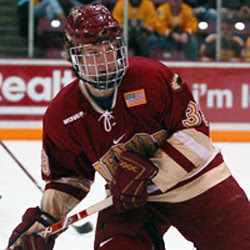 Is it just me or does the NCAA seem a bit disfunctional lately?

You've got players jumping ship to play in the CHL, others to play pro, then there have been the multiple suspensions of players for disciplinary reasons and most recently a flatout crime that could lead to legal charges.

More and more it seems to me that there are players choosing the NCAA route for all the wrong reasons than for those that will benefit their hockey or post-hockey careers.

First, why do players choose the NCAA route? That in itself will be an episode on The Pipeline Show this off-season but for the sake of brevity... there are a few good reasons.

2) No movement - players in college don't get traded so there is a lot more stability. It might not sound like a big deal but plenty of players have mentioned it to me.

3) College life - let's be honest, college can be one huge party after another and while the players obviously can't indulge too much, they do and they're celebirties on campus meaning... well, they have fun put it that way.

4) Game atmosphere - There are some great CHL arenas but when you compare that crowd to 6500 strong chanting at Michigan or 13,000 in North Dakota or Wisconsin (not to mention the vast majority of them a partying campus kids) throw in the marching bands... it's really no comparison and players have told me the same.

So what's the problem?

Some players decide after a year that the lack of games is detrimental to development. Others can't keep up their academics so leave (or are helped out the door) and head to the CHL team that drafted them. Others seemingly choose a weak NCAA program where they know they will standout, get a lot of ice time and produce numbers during their draft eyar and then they bolt to the CHL.

Jim O'Brien left Minnesota for the Seattle Thunderbirds because he wasn't playing enough and wanted to get into a league where travel and game schedule was more NHL -like. Casey Pierro-Zabotel wanted to play NCAA this year but didn't have the grades so now he's with the Vancouver Giants in the WHL. The Calgary Hitmen brougth in T.J. Galiardi who starred for Dartmouth College last year, was drafted by Colorado, then left to play a final CHL year before turning pro next season.

Boston College had to indefinitely suspend Brett Motherwell and Brian O’Hanley earlier this year for conduct the program found unforgiveable. The lesson may have been lost on Motherwell who promptly signed a minor league contract with the Columbus Blue Jackets AHL affiliate in Syracuse but O'Hanley, a 9th round pick by San Jose in 2003, has yet to resurface after being dumped by the Eagles.

A couple of weeks ago in Denver, Brock Trotter (pictured) up and left after signing a minor league contract with the Montreal Canadiens. Trotter's reasons for leaving the Pioneers has not been made official but if the rumors have any merit, it was likely a mutual decision with the school more than happy to have him leave.

Recently Michigan forward Kevin Quick (a Tampa Bay 3rd rounder) was kicked off the team for alleged credit card theft and purchase in the thousands of dollars. Although Quick has apparently signed on with the Norfolk Admirals of the AHL, he might still face legal charges back in Michigan. Talk is that the card he stole... none other than his freshman teammate Carl Hagelin.

It's not as though these things have never happened before, hell over the years several players have had legal issues dog themn while in college and it doesn't just happen to little known players.

Last year Jonathon Toews, T.J. Oshie and Robiie Bina got in some trouble in North Dakota.

One night in Wisconsin, Brad Winchester came to the defence of a teammate in a bar, the situation escalated and before he knew if he was facing charges of hitting a police officer. Matt Greene earned himself a DUI back in his college days and was suspended for two games as a result. Center Geoff Paukovich also has a legal history albeit prior to his college days with Denver and in a situation which has been questioned for it's legitimacy.

College hockey is supposed to produce well rounded, educated athletes and although I'm sure it still does, something seems to be wrong lately. I wonder what it is.
Posted by Guy Flaming @ 7:15 PM