The World Is Coming To Camrose...Again 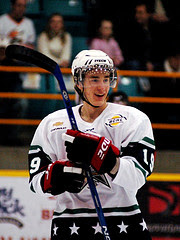 On Monday night, I reported on Global Television it will likely be announced Thursday that Camrose will be awarded next year's World Junior A Challenge. This is something that I am pretty excited about. It's not the World Junior Championship - which will hopefully be in Edmonton in 2012 - but it's still pretty good hockey, and if you're a prospect junky like myself, it's a good place to see some future stars.

2 Years ago, Kyle Turris (photo courtesy BCHL) played for Team Canada West, and The Pipeline Show was able to get a great scouting report on Turris by Canadian Head Coach Boris Rybalka.

This past year, Kodiaks forward Joe Colborne played for Team Canada West, and Jumbo Joe could be a top 15 pick this June.

But it's not just the odd Canadian kid who you'll remember from this tournament. In 2007, Russia sent several of their young stars. Viatcheslav Voinov and Maxim Chudinov (also a Mac's Midget Alum) suited up, as well as forwards Kirill Petrov, Evgeni Grachev and Nikita Filatov. All 4 are good bets to be high draft picks this year as well. In the case of Filatov, ISS has him ranked 3rd overall and Grachev right now sits 15th on their list. In fact all but 2 players from Russia's roster are 2008 draft eligible. The two that aren't will be in 2009.

Canada has won this tournament in the two years it's been held, with Boris Rybalka leading the way both times. I would expect Boris to be asked to coach again, especially with the event being held in the brand new beautiful rink his team plays in. However, what might prevent the Kodiaks bench boss from committing to Team Canada is a possible job offer from another league. Possibly the NCAA.

Now there are some out there that will look at this tournament with the stink eye, because it basically spelled the end of The Viking Cup. I understand to a point their frustration, but you can still enjoy this event. And from what I'm hearing, the Viking Cup isn't all that dead after all. Tune into Global Sports (cheap shameless plug I know) for more on a possible rebirth of the event using College players both from north and south of the border.

The Viking Cup was a great event that gave fans their first look at Dominik Hasek, Oli Jokinen and Tom Gilbert to name a few. Maybe the Junior A Challenge will create similar memories for Camrose hockey fans this November.
Posted by Dean Millard @ 1:08 AM