Another Chance For Alexei? 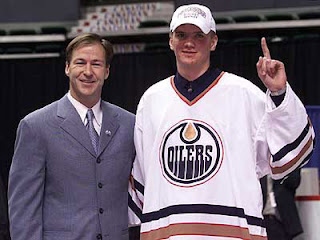 As Guy pointed out in an earlier entry, the Oilers should have atleast one player coming over from Europe next year, in goaltender Bjorn Bjurling.

Alexei Mikhnov is having a pretty good season with Yaroslavl Lokomotiv in the Russian Super League, at blog time he had amassed 14 goals, 18 assists in 44 games, and appears to be getting some first line minutes.

While the numbers tell a nice story, it will be interesting to hear what Oilers VP of hockey operations Kevin Prendergast has to say when he returns from watching the Ukraine born winger in person.

Has his skating improved? Can he play the North American game? Does he even want to?

That last question, I think is the most important.

The Oilers didn't exactly give the potential power forward a great opportunity last year when he played all of 13:43 in two regular season games, before being shipped to the minors.

Heck one analyst who will remain nameless, professed that Mikhnov will never be an NHL regular after watching him for about 10 seconds.

Let's keep in mind this was a stranger in a strange land, trying not only to learn a brand new system, but also the english language. And all he received was 13:43 of ice time????

When the 17th overall pick in the 2000 draft was sent to Wilkes/Barre Scranton, he played okay with 18 points in 27 games, but then asked for and was granted a return to Russia, where's he's played ever since.

And while some, including my co-host, think he needs to convince the Oilers he's capable of playing in the NHL, it's my opinion that they need to convince him to give it another shot.

Keep in mind, the Russians are trying to rival the NHL with a new league, using the backing of Russian energy tycoon Alexander Medvedev and his 304 billion dollar worth.

Would Mikhnov want to come over to Edmonton, where he might sit in the press box, or worse be sent to the AHL again, or stay where he is and play for big bucks?

What may also hurt the 6 foot 5 inch winger's chances of coming over, is the Oilers depth chart. Where do they fit him in next year? Especially if Rob Schremp makes the jump to the big club? Unless trade winds blow, I'm not sure who he beats out of the current line up.

One thing I seriously hope happens, is that if the man that Oilers fans have dubbed "Traktor Boy" does give Edmonton another chance, he gets as much if not more of an opportunity than prospects - turning into suspects Marc Pouliot (12 Points in 63 NHL games) and JF Jacques (0 Points in 53 games).

Of course that's up to head coach Craig MacTavish, who seemed to form a pretty quick opinion of Mikhnov the first time around.

And before I'm accused of being a players apologist, I do think the 25 year old will have to prove himself and shouldn't get a spot handed to him...just a chance at earning that spot.
Posted by Dean Millard @ 9:06 PM