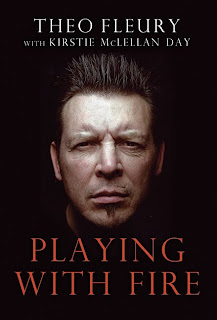 If you missed Tuesday's edition of The Pipeline Show, don't worry, that's what audio archives are for! Here is what you missed:

Dean and I were very excited to have been able to line up Theoren Fleury for the program. (OK, credit Dean for doing all the legwork on setting that interview up). Fleury has been on a whirlwind, cross-Canada book tour to promote his sold out autobiography called Playing With Fire. We were pleased to have been able to speak with the former Calgary Flames forward for two full segments and he spoke on several subjects. Of course he discussed the motivation behind writing the book and his coming forward in regards to acknowledging that he was abused by his former coach Graham James. Much of his life is now dedicated to helping others who have, or are, facing similar stories. For more on that subject we encourage you to visit his website HERE

We also talked to Fleury about other less-heavy subjects like his fond memories of his junior hockey career with the Moose Jaw Warriors and his experiences at the World Junior Championship playing for Team Canada. Of course Fleury was a catalyst for the Punch-Up at Piestany in 1987 and also a part of the gold medal winning squad the next year. To Hear both segments we had with Theo Fleury, click HERE . 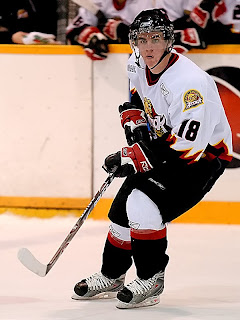 Every week on The Pipeline Show we like to introduce fans to another player eligible for the next NHL Entry Draft. One such 2010 player is Joey Hishon of the Owen Sound Attack. Although he's currently injured, Hishon is, in our mind, a player to watch for this season. He played in the U18 tournament in Fargo last April but oddly enough, wasn't a part of Canada's summer entry to the Ivan Hlinka tournament. Hishon touches on that as well as many other subjects including his foot injury. You can hear everything that Hishon had to say by clicking HERE 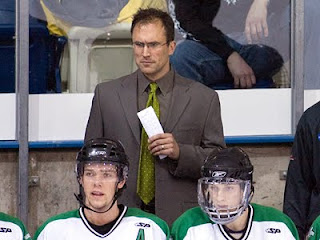 Last year we spoke with coach Mark Carlson before the 2008 WJAC in Camrose, a tournament that his American squad went on to win. The problem with that interview was that it came just days before his team roster was formally announced so he couldn't say a whole lot about the make up of the team. This year we had no such problem so we got a great amount of information about what Team USHL, er... Team USA will look like this year in PEI. Carlson talks specifically about several players including his goaltending tandem, a pair of USHL netminders with less that exciting stats right now in that league. David Gerths is the only returning player but there are several others he is expecting big things from at the tournament. Hear what coach Carlson said about his sqaud by clicking HERE . 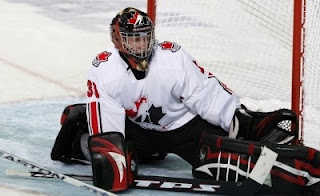 Last but not least, we had a conversation with goaltender Jake Allen. Allen is the marquee player with the Montreal Juniors of the QMJHL, he's a 2nd round pick of the St. Louis Blues and he's quite probably the starter for Canada at the 2010 WJC in Saskatoon/Regina.. We had lots to talk to Allen about and he had lots to say; hear it all by clicking HERE.
Posted by Guy Flaming @ 10:56 AM