Rise of the Winterhawks

Junior hockey left Edmonton in 1976, and surfaced in Oregon as the Portland Winterhawks. A team that in it's 34 seasons has won 8 WHL Western Conference championships, 4 league titles and 2 Memorial Cups, with their last coming in 1997-98. That team featured current NHL stars Marion Hossa and Brendan Morrow, while in the past several other 'Hawks have flown to the NHL. Cam Neely, Wayne and Dave Babych, Andrew Ference and Clint Malarchuk to name a few.

However the last few years have been extremely lean for Portland, who have finished last in the U.S. division for 3 straight seasons. Two of those years the Hawks were basement dwellers for the entire league, and won just 11 games in 2007-2008.

This year, things are different for the Winterhawks, and it all started with new owner Bill Gallacher, who purchased the team just over a year ago. He made immediate changes on the bench, hiring former NHL assistant Mike Johnston, as well as former NHL player Travis Green. But with Gallacher came changes off the ice as well. Rumours of players having to buy their own sticks or travel to Canada for medical treatment have disappeared and pride is being restored to the Winterhawks.

The one benefit to finishing so low in the standings is very good bantam draft picks. Ty Rattie, and Brad Ross are contributing, as well as import draft pick Nino Niederreiter of Switzerland has people talking resurgence for Portland.

Thursday they rolled through Edmonton to the tune of a 5-2 victory. Yes the Oil Kings are without franchise defenceman Mark Pysyk as well as fellow blueliner Henrik Tervonen and forwards Clayton Cumiskey, TJ Foster and Rhett Rachinski due to injury, but that doesn't diminish how impressive the Hawks are right now.

The win moves them to the top of the entire WHL standings and it doesn't look like their ready to move off the perch anytime soon. So exactly why are the Hawks flying high again? 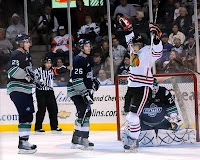 It starts behind the bench. The entire Portland staff was gutted last year. From coaches to trainers. Mike Johnston is using his 9 years of assistant coaching experience with L.A. and Vancouver to develop a winning attitude. Guy Flaming and I caught up with the head hawk before tonight's game. You can hear his thoughts on why he chose to coach in the WHL rather than pursue another NHL position, as well as making the transition to dealing with millionaires to teenagers, and just who some of his key players are, by clicking here. 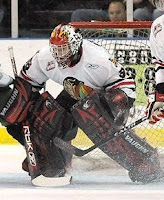 Before I get into who impressed me tonight, think about how refreshing it might be for goaltender Kurtis Mucha? After this year, he'll have been a Hawk for 5 full seasons. He's seen it all. He also turned heads at Oilers training camp and was actually offered an AHL contract, but chose to return to Portland. That wouldn't have happened without an ownership change last year. We also spoke to Mucha before Thursday's victory and you can catch that conversation here.

Mucha is one of the reasons why Portland is on top of the WHL right now, but he's far from the only one. Thursday overage forward Chris Francis was terrific setting up 3 goals to vault him to the top of Portlands scoring leaders. He now has 15 points, just 4 back of the league leaders. Luke Walker and Spencer Bennett, Francis' linemates, were also very good picking up a goal and assist each. The trio was Portland's best line in my opinion Thursday night, but there was another impressive line, filled with youth, size and skill.

Swiss forward Nino Niederreiter at 6.02 203 lbs, Brad Ross at 6.01 173 lbs, and Ryan Johansen (from Port Moody, not Sweden) at 6.03 188 lbs make up one of the best lines in the league, and they're all likely to be drafted this June. ISS has the Swiss as an almost can't miss, ranking him 6th among WHL prospects. Ross and Johansen are 19th and 20th respectively. The 3 amigos were nearly unstoppable against Edmonton, especially on the cycle and combined for 2 goals and an assist. I was really impressed with Johansen who was used on the power play and penalty kill as well. His favorite player is Joe Thornton and he reminds me of another Joe...as in Colborne who was a Bruins first round pick in 2008 and is now at Denver University. Like Colborne did at his age, Johansen needs to fill out, but that will come in time. Niederreiter really caught Guy's eye, and I was impressed with his speed. We both like Ross' grit and he scored a beauty of a goal, burning down the left side, crossing in front of Torrie and tucking it in on the backhand.

And then there's defenceman Troy Rutkowski. The Edmonton product has 13 points so far this year. He's 6.01 and 220 lbs. One scout told us tonight he might be even better if he slims down a bit, but I was impressed, and so is ISS who have him ranked 17th.

So if you haven't picked up the theme here, check out the Hawks at a rink near you soon.
Posted by Dean Millard @ 11:31 PM