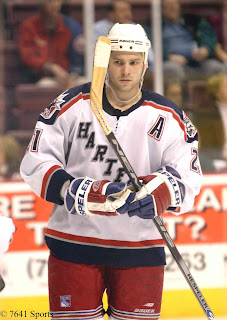 The Springfield Falcons have announced the signing of forward Chad Wiseman to an amateur tryout deal and have simultaneously parted ways with Adam Henrich.

Henrich leaves the team with two points in Springfield's first four games but obviously wasn't fitting in the way the Oilers had hoped. The former Tampa Bay 2nd round pick will surely find work with another minor league team.

On the other hand, Wiseman joins the Falcons and has a fairly extensive background at the AHL level. The left winger is listed at 6'1 and just under 210 lbs so there are no concerns about size. Wiseman was a former 8th round pick of the San Jose Sharks back in 2000 and has appeared in a total of 9 NHL games.

With stops in Hartford, Cleveland and Hershey, Wiseman has hit the 50-point plateau 4 times and is coming off a 23-game campaign with Lowell where he had 19 points. Wiseman also had a stop in Germany where he had 23 points in 28 games with Wolfsburg Grizzly Adams (no... not kidding).

More details and/or comments after my calls are returned.
Posted by Guy Flaming @ 2:25 PM