The University of North Dakota Fighting Sioux were ranked 6th in the seaons first poll. According to the USCHO.COM/CBS COLLEGE SPORTS poll which can be found here, the Sioux are behind only Denver, defending champions Boston University, Michigan, Miami and Notre Dame. 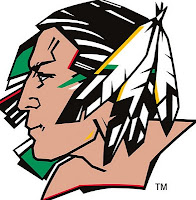 However the Sioux came out on top when it comes to the best jersey, which isn't just about NCAA hockey. The Sioux beat Chicago in the final of a contest put on by the hockey news. You can read about that here.

Last week we talked about UND's conference which is the WCHA, tomorrow we'll preview the CCHA on The Pipline Show. Details can be found here.
Posted by Dean Millard @ 6:30 PM