~
Each year The Pipeline Show is excited to bring you entries to our blog written by players in their draft year and 2009-10 is no exception. So far we've heard from Edmonton Oil Kings defenceman Mark Pysyk and Prince George Cougars forward Brett Connolly.

Today we get a quick note from the injured Oil Kings blueliner who has been on the shelf for the last few games... 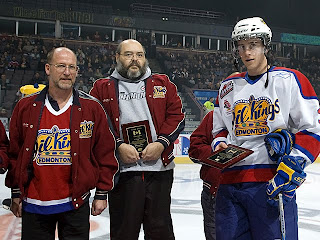 Its been a long time since I've written on the blog but I've been out for a while now with a minor concussion which I suffered on Oct 9th in Lethbridge. I've been out for about 11 days just to make sure everything is 100% before I come back and do anything.

Being out of the lineup is a definite setback in my draft year and also its tough to wait until everything is better when you want to play every night. But I am back to 100% now and I feel good and ready to come back into the lineup and pick up right where I left off.

The Oil Kings next game is Friday night when they host the Calgary Hitmen.

Mark Pysyk is ranked 12th overall by International Scouting Services in their October release and he was listed in the 20th position by North American Central Scouting in September. The 6'1, 175 lb defenceman has 3 points in 8 games with the Oil Kings this year who selected him 3rd overall in the 2007 WHL Bantam Draft.