Here was what the Top 20 Poll looked like heading into the weekend's schedule with the record of the teams over the last couple of days: 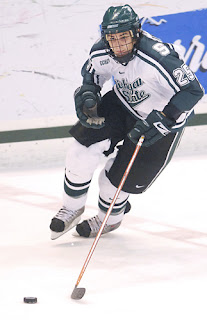 The top-ranked RedHawks of Miami had the hands full this weekend with a resurgent group of Spartans from Michigan State. Last year's season of ineptitude appears to be forgotten for MSU who has scored goals and won games this year... both areas of challenge last season. Miami pulled out a 2-1 win on Friday night thanks to a late third period marker from Carter Camper and yes... it does seem like I'm mentioning that name every week. Camper and Tommy Wingels (SJ) both had a pair of points in that close contest. The rematch was claimed by Michigan State in overtime by a 3-2 score. The story of the early season for MSU has to be the play of Corey Tropp (BUF). He ended last season in shame thanks to his part in the Steven Kampfer incident but he's playing inspired hockey this season and leads the NCAA in scoring with 12 points.

North Dakota took it to Alaska-Anchorage on Friday night, shutting out the Seawolves by a 5-0 score. Freshman Aaron Dell got the start for the Sioux and he posted the goose egg in his first NCAA game - not bad at all. Brad Eidsness (BUF) was back between the pipes on Saturday but it was the Seawolves who stole a 2-1 win. Two second period goals were enough to complete the upset.

The Boston University Terriers extended their losing streak to 3 games before finally finding the win column on Saturday. First, Notre Dame blanked BU 3-0 on a rare Tuesday night contest despite on registering 16 shots against netminder Kieran Millan (COL). Ryan Lambert of Puck Daddy was inspired by this game to write up a very interesting article which details the sloppy performances from both highly touted tams. BU finally got back on track with a win over Michigan on Saturday. Kevin Shattenkirk (COL) recorded 2 assists and Millan made 33 saves in a 3-2 win. 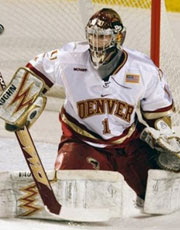 There might be trouble in Minnesota as the Golden Gophers are off to a dismal 0-3-1 start with all three losses being shutouts. The Gophers have only managed 3 goals after 4 games... definitely not what was expected from that club this year. The latest Gopher killers were the Denver Pioneers who beat Minnesota by identical 3-0 scores on Friday and Saturday. Another one of my pre-season Hobey candidates, Rhett Rakhshani (NYI), had three more points to move to 8 in 6 games. For the first time this year the Pioneers played netminder Marc Cheverie (FLA) in both starts and low and behold, a pair of shutouts.

The Wolverines lost to Boston University (see above) but narrowly beat Niagara on Thursday, 3-2. Michigan had a 3-0 first period lead but were able to shut the door in the third when they faced 16 Niagara shots.

The Big Red of Cornell played a pair of exhibition games beating Windsor (CIS) by a 7-0 score and then losing to the US National Development team by a 3-2 score. Riley Nash (EDM) had a goal and 2 assists over the two games.

The Colorado College Tigers were expected to struggle this year but so far they've done nothing but impress - they might be the exact opposite of Minnesota. C.C. is 3-0- after earning a pair of victories over Michigan Tech by 4-1 and 8-5 scores. Senior Billy Sweatt (CHI) leads the Tigers in scoring with 10 points n 6 games and junior Tyler Johnson has 5 goals.

If there is a program making a bit of noise for itself right now it might be Merrimack. The Warriors surprised #7 Vermont by a 5-2 margin on Friday and followed that up with a 4-1 drubbing of Connecticut on Sunday. Merrimack got goals from 5 different players on Friday night and they outshot the Catamounts 34-27. On Sunday the Warriors spread the offence around again with 4 different scorers and they won the shot battle again by 30-24 against the Huskies. Junior Chris Barton has 6 goals in 6 games and Frenchman Stephane Da Costa has 6 points in 3 games. With a 4-2 record, I wonder if Merrimack might start getting a bit of recognition from the poll voters if only as an honorable mention.
Posted by Guy Flaming @ 8:58 PM

The story of the early season for MSU has to be the play of Corey Tropp (MTL). He ended last season in shame thanks to his part in the Steven Kampfer incident but he's playing inspired hockey this season and leads the NCAA in scoring with 12 points.


He's actually a Buffalo pick. 3rd rounder in 2007 as per hockeydb.com.

thanks, I always get those two mixed up... the other being Andrew Conboy.