Grimaldi NOT Jumping to 'The Dub' 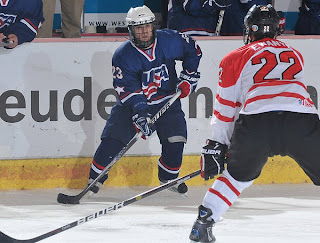 RGrimaldi23 (Rocco Grimaldi)
"Many different choices, but I'm going with the Dub. The Dub is the best fit for me #TheDub"

TPS checked into this and the update is below.


The Florida Panthers 2nd round pick this past June has been staunchly devoted to his commitment to North Dakota for this coming season. This would be a complete shocker. The Portland Winterhawks acquired Grimaldi's CHL rights from the Vancouver Giants during the 2010-11 season but few thought they'd be able to successfully bring the player north.

I guess we'll see shortly how accurate this is. Certainly one line on Twitter does not make for a press release... nothing has been made official that I have seen from either Portland or North Dakota.

UPDATE: I contacted TPS regular Brad Elliot Schlossman who covers the Fighting Sioux for the Grand Forks Herald who then texted Grimaldi himself for the scoop... it turns out the "Dub" that Grimaldi has settled on is a Volkswagen car... often refereed to as a "V-Dub".

Never let it be said that Rocco Grimaldi doesn't have a sense of humor.

Unfair! I about pooped when I thought I'd be able to see Grimaldi 36 times this season.....oh well :(

I was thinking maybe he was Cruisin' the Dub