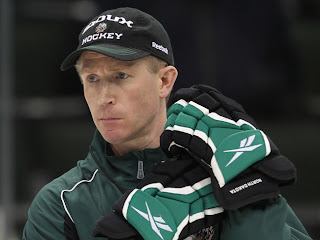 That about summed up the feelings of most people who watched the semi-final of the 2011 Frozen Four that saw Berenson's Wolverines upset North Dakota 2-0, abruptly ending the season for the Fighting Sioux.

At the time, UND head coach Dave Hakstol told me that it was a loss that was going to take a very long time to get over. The coach joined me on Tuesday evening's edition of TPS for a pretty candid discussion which I began by asking if he's yet gotten over that devastating defeat.

"It was one of those ends to a season, one of those losses, that I don't think you necessarily can just get over and bypass but yeah... we've turned that page and after a few days you have to turn that page and move on to the next order of business and for us that's obviously building our team and our program for this year."

I spoke at length with coach Hakstol about that process as he and the Sioux get ready for the coming year with a high turnover in player personnel, a good incoming freshmen class, the loss of one key recruit to the CHL (was he surprised?) and the hope that some former depth players will step to the fore in 2011-12.

As usual, coach Hakstol didn't hold much back.


North Dakota has lost 6 of its top 7 scorers from last year's roster (Frattin, Gregoire, Trupp, Malone, Genoway and Hextall) to either graduation or to pro contracts. That means that the opportunity will be there for former depth/role players to step up and take on a much bigger role. I asked Hakstol who some of those guys might be. 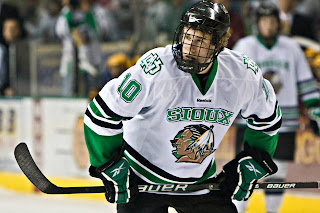 "A guy from right there in Alberta, a Florida pick, Corban Knight (above) really flew under the radar last year," the coach suggested, "He had a great year playing with Gregoire and Hextall who have both signed NHL contracts and have moved on early. Corban was a real catalyst."

Hakstol also named singled out Brock Nelson (CHI) and Danny Kristo (MTL) as two other who will be relied upon to lead the way.

Of course there's a group of incoming freshman on the way as well and there are expectations that some of those first year players will take on bigger roles than usual. 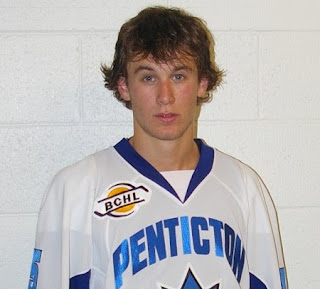 That led to a topic I really wanted to get to - Grimaldi's practical joke over the weekend that had some people believing that he was backpedaling from his NCAA path to join Portland in the WHL. I asked the coach what he thought of the prank and what it told him about Grimaldi's character. 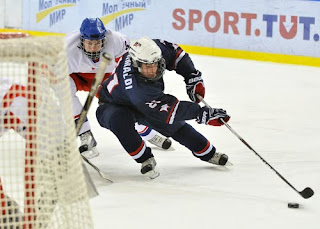 "There's a lot of personality to Rocco," Hakstol began, "He's a heck of a talented player, very competitive and obviously he's got his Twitter skills in order as well. You have to have a little bit of fun with the game overall, I guess he took an opportunity to expand on what's become a pretty heated and hot topic over the last couple of months here and he had a little bit of fun with it."

"At the end of the day I think you have to have some fun with the game but I don't think that you'll see me on Twitter any time soon."

Of course Grimaldi was making light of the CHL/NCAA recruiting battle that cost North Dakota 15th overall NHL draft pick J.T. Miller who has opted to play in the OHL with Plymouth.

North Dakota losing players early isn't a rarity but it usually occurs after they've played with the Sioux for 2-3 years. I asked coach Hakstol for his perspective of that decision and whether he was caught off guard by Miller's announcement or if he'd had a hint that it was going to happen.

"I was surprised by his decision," admitted the Canadian-born coach, "I'm the first guy to tell you, you know Guy, I'm very respectful of what the CHL does, whichever league it is, and I'm respectful of the Plymouth Whalers. In terms of development though, I think no question what we've done stands on its own as well."

"We've developed a lot of guys into the National Hockey League whether it be guys on the fast track like [Zach] Parise, [Jonathan] Toews, [Travis] Zajac or guys that have needed that third year like Drew Stafford, Matt Greene, T.J. Oshie, Mike Commodore," he continued." 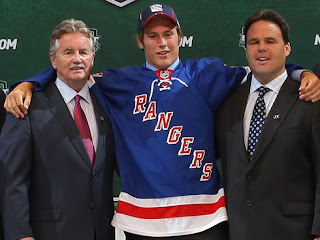 "'Surprised' probably probably isn't the right word... 'disappointed' I guess," Hakstol said, "After you build a relationship over time and then to have it end that way. But in saying that, I've got nothing but respect for the people that are doing their job up their in the CHL and I know a lot of them personally and for J.T. he made a decision that he personally felt was right for him."

I was curious to know what, if any, role the New York Rangers had played in the story and asked if GM Glen Sather or anyone from the NHL club had been in contact with Hakstol before or since Miller's OHL decision was made.

"We've had contact and communication with the Rangers but I really think in this case it was a personal choice on J.T. Miller's part," Hakstol stated. He added many more thoughts on North Dakota's relations with NHL teams which you can hear by listening to the complete interview (see the link at the end of this article). 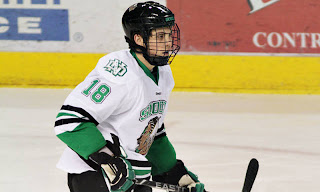 The Edmonton Oilers selected Dillon Simpson in the 4th round of the 2011 NHL Draft and after playing as a 17-year-old in what is largely a 19-23 year old league, it shouldn't have surprised anyone that he was well down the depth chart last year. Still, the blueliner managed 10 points in 30 games so I asked Hakstol what he envisioned Simpson's role would be this year as a sophomore with the Sioux.

"He's coming off a really good developmental freshman year and I think he can step right into the thick of things and be one of our top 3 guys this year. I see him playing a key role for us," Hakstol said, "Anyone who has spent any time around him knows what kind of a person he is; he's as rock solid as I've seen at his age. He's a real pleasure to be around and to coach."

"As a player he's an extremely intelligent player and has an offensive upside; I think he has a strong stick, a great patience and puck poise off of the blueline offensively," Hakstol said, "I see him stepping into a key role for us as a two-way guy and I think he can run a power play for us right away this year."

Hakstol then paid the young player one of the biggest compliments I think I've heard a coach give because in doing so he had to basically admit that he'd made a mistake at a crucial time last year - not something you hear from a coach very often.

"It was a really tough decision but he was a guy that wasn't in the line up in our last game of the year," Hakstol said, "As I look back at some of the weaknesses of our team from that particular night, he's probably a guy that would have been a real benefit to have in the line up with some of the abilities that he has." 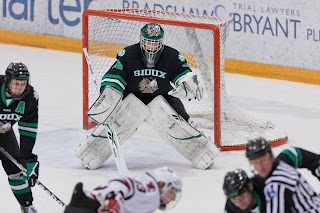 Our interview continued and we discussed the benefit of having two returning netminders in Aaron Dell (above) and Brad Eidsness (BUF), especially considering the turnover throughout the rest of the team.

From there we switched gears and talked about the impact that conference realignment in 2013-14 will have on North Dakota from a recruiting perspective and if he had any concerns for college hockey because of the drastic changes on the way.

I ended the interview by asking about the ongoing nickname kerfuffle but the coach was limited in what he could say on the subject because of his position at the University. Suffice to say that I voiced my thoughts on the matter.

The above quotes were just a sampling of what coach Hakstol had to say. If you want to hear the entire interview.. CLICK HERE.