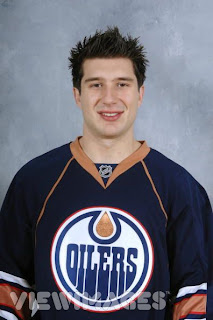 It's been 9 months since he last played a meaningful game, but Oiler prospect Tyler Spurgeon is about to show people that he's back and ready to play.

It was in a game against the Providence Bruins way back on November 18th, 2007 when Spurgeon went down to injury. In an exclusive interview I had with him recently, the Edmonton product described what happened that night.

"There was a puck rimmed up the boards and their defenceman kind of counter-pinched me," he described, "I fell down to my knees but the puck was still within our zone so I chipped it out from on my knees and then a player finished me from behind and I was on my knees against the wall so..."

Spurgeon suffered a serious concussion which knocked him out of action for the rest of the 2007-08 season. Recovery was a painfully slow process for the 22-year-old who says that it wasn't the severity of the actual concussion that kept him sidelined but rather the post concussion effects.

In late January during the Top Prospects event I ran into him in the bowels of Rexall Place where he was working out. At the time he said the headaches were subsiding but he was still experiencing optical problems especially blurry peripheral vision. I recently asked him if at some point last year he grew concerned that the injury might be career threatening.

"That's the thing, it gets to be pretty frustrating so you talk to a lot of people who have been in the same situation as you, I talked with Jarret [Stoll], Dwayne Roloson hooked me up with [Nelson] Emerson who is now the assistant coach with the L.A. Kings because he had to quit because of concussion," Spurgeon said, "You talk to them and they tell you that it's going to get better but when you're not feeling good or it's kind of up and down, it gets frustrating not knowing what's going to happen."

We always hear athletes talk about the dizziness or the headaches that plague them when training or riding the stationary bike but Spurgeon says the lingering effects of the concussion infiltrated his daily routine too.

"There was a lot of stuff, I remember with text messages I'd open them up, read them and then go to reply and I couldn't remember the details of the message or maybe who it was from," he said, "Fatigue is a major factor. Waking up every morning and having that headache, it just wears on you and you get tired. Some nights you sleep well and others you don't so it can get really frustrating."

Eventually though Spurgeon did start feeling better and says that around April he started getting hopeful that he could finish the year in Springfield. However, he increased his skating practice to simulate games but the motion and circling drills still bothered him. That led him to take an extended break from activity which in the end may have proved to be the best decision.

"It probably wasn't until the end of May and after I'd taken basically more than a month off that I started to feel a lot better," Spurgeon said, "I think in a lot of ways during the season you see that next game or that next week coming up and you think 'hey if I start skating here maybe I can play here' and so i was pushing and you miss it so much that maybe you drive yourself a little harder than you should. Instead I just got away from it all." 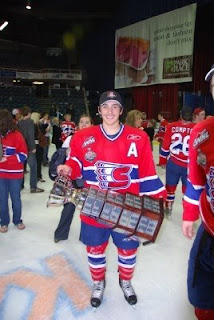 During the month off he was able to attend the Memorial Cup in Kitchener where he saw his little brother and the Spokane Chiefs capture the CHL title. Brother Jared Spurgeon (left) was drafted by the New York Islanders.

"It was incredible, I was so happy for him." said Spurgeon proudly, "To have that breakout season and to do as well as the team did it was huge for him."

With constant help from Oilers head medical trainer Ken Lowe and Dr. Dhiren Naidu (a team physician), Spurgeon found the proper balance between rehab, training and rest. As a member of the Kelowna Rockets Spurgeon also had a concussion but says the two experiences were very different.

"With the one in Kelowna it was one big bang where I couldn't do anything and then all of a sudden I was good where as this was more of a slow progress, " he described, "I'd start feeling better then take some steps back and that was one of the toughest things to deal with."

A couple weeks ago I wrote my top 20 list of Oiler prospects ofr Hockey's Future and as part of my prep work for it I contacted the Oilers for an update on both J.F. Jacques and Spurgeon. What I was told was "Not Spurgeon but getting close". As a result I did not include Spurgeon on my top 20 list; as a player who missed almost an entire season with a concussion and was not yet recovered, I think that was justified.

On Friday night at Oil Kings camp I ran into Pete Semonick, Spurgeon's agent, who mentioned he'd noticed the top 20 didn't include his client. He'd also heard me say on the air in the last couple of weeks exactly what I was told by Edmonton, that Spurgeon wasn't ready to go.

"He's actually been 100% healthy and skating hard for about 7 or 8 weeks now," Semonick informed me.

Shortly after my chance meeting with Semonick I called Spurgeon to get the low down.

"It's been a fair while now, I can't even remember when I took the concussion test last but I passed that," he said, "Before I was checking in with Kenny [Lowe] and Dr. Naidu every couple of weeks but I haven't had to do that at all in the last two months."

"I've been working out with Fernando [Pisani] and [Kyle] Brodziak in St. Albert and I've been doing the same stuff as them; skating, shooting and weights since June."

Now symptom free the next goal is obviously to prove to the organization that he shouldn't be written off and that he can pick up where he left off as a player on the rise. To do that though he's got to play the same feisty, 2-way role that got him drafted and that will mean contact and getting dirty in the corners but Spurgeon says he's not about to change.

In a normal off-season Spurgeon's training would begin at the end of May which is pretty much the same as this summer so the player should be coming to camp as though it were any other year. Last fall he arrived at training camp 3-weeks removed from rehab from abdominal surgery but this time around Spurgeon says he's 100%.

"This year I've got a full summer of training in, my shoulders are good and my head is good so it's actually a really exciting time for myself," he said, "I think the last time I played a healthy season was when I was 18 in Kelowna and things went pretty well for myself and the team there."

That said, there are those who are going to want to lable Spurgeon as injury prone. Just don't say it to his face.

"That's the worst thing that anybody can say to me," he laughed, "I hate hearing that I'm injury prone because I think a lot of it was just bad luck from playing in some rough situations and getting stuck in some bad spots. I definitely want to clear my name of that."

His goal is to make the Oilers but brealistically he knows Springfield is likely where he'll end up. Playing for former Kelowna head coach Jeff Truitt (right) should make for a nice transition back.

"He's knows what I'm all about and I know him as well and it's a great relationship," said the 2004 8th round pick, "He holds me accountable and I know that he's a guy that I can go and talk to about my game and if he's hard on me it's not for personal reasons but it's because he wants me to get better."

If you're looking for a potential candidate for the captaincy in Springfield you could do a lot worse than by pinning a 'C' on Spurgeon's chest. There are other worthy choices as well (Tim Sestito comes to mind) but no other Falcon knows the coach as well as Spurgeon who wore the letter as the leader of the Rockets.

For now though, Tyler Spurgeon is just looking forward to getting to camp and showing everyone that he's back and ready to play some hockey.

"I've been looking forward to this for a long time now, it's too much time away from hockey for this guy!"

The Edmonton Oilers open rookie camp on Friday September 12th and have their first on ice sessions on the 13th at the Edgeworth Centre in Camrose. The mini-tournament rosters will consist of players with less than 100 pro games to their credit... through a combination of appearances with Springfield, Wilkes-Barre and Stockton, Spurgeon has played 85 total.

Oh and about that Top 20 list... I can't update it anymore but suffice to say that if I'd have known he was healthy, Spurgeon would have been on the tail end. Consider him now ranked at 20.5 (although he would have been slightly higher than that).
Posted by Guy Flaming @ 3:05 PM

Happy to hear that Spurgeon's better. Some prospects you can't help but pull for, and he's one of them.