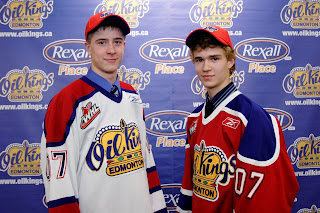 The 2nd year for the Edmonton Oil Kings is rapidly approaching and as rookie camp and main camp gives way to the annual mini-tournament, the WHL franchise has hacked the number of players left in camp.

36 players remain on the active roster for the Oil Kings as they prepare to take on the Swift Current Broncos, Medicine Hat Tigers and Regina Pats this weekend in St. Albert. Amongst that group are 15-year-olds Michael St. Croix, Travis Ewanyk and Laurent Brossoit. The taste of WHL game action will be a treat for them but all 3 will return to their club teams next week.

Dalyn Flette - The incumbant netminder who Bob Green recently described on The Pipeline Show as a guy who will be the starter coming out of camp.

Cam Lanigan - Only 16-years-old but from my limited viewings of rookie and main camp, the best goalie performances so far have come from this Calgarian.

Patrick Terris - 17-years-old and has had a very impressive camp thus far, a realistic option for the team.

Harrison May - He's 19-years-old and was brought in to ensure that competition in camp was, well, competitive. He's been solid as expected and will keep the pressure on.

The Oil Kings website lists Devin Balness as a defender but I believe he's a forward. Perhaps he's that versatile, I don't know but Balness has looked good and could be one of the 16-year-olds with a realistic shot.

Kurtis Decker, Kieran Friesen and Braeden Laroque have been good enough to get this far but I'm not sure that any of them will make the final roster. The tournament should decide that.

Jesse Pearson has definitely gained my attention having 3 fights with 3 different Oil Kings vets already, and he's done well. He's physical, has thrown the biggest hits of camp thus far and provides that element that the team lacked until aquiring Brennan Sonne last year. The fact that he's still here and 6'5 Wade Epp is not... tells me a lot.

Adrian Van de Mosselaer will be back, he looks bigger and stronger than last year and should be a lock. 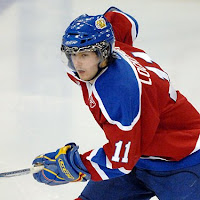 Brandon Lockerby (pictured) was a valuable chunk on the PP last year before he went down to injury but in the search for offence from the blueline, he should be in.

Mark Pysyk is definitely on the club this season and will be the focal point of the team for the next few years.

Tyler Hlookoff, Cameron Cepek and Drew Nichol are all returning veterans but strong performances from newcomers could make any of them expendable, I don't think any of the three can afford to have a disappointing tournament.

Interesting to note that 20-year-old J.P. Saszkiewisz has left the team and joined the University of Alberta Golden Bears. Chances of him being one of the 3 overagers on the team were looking less and less each day as Dowd and Lee were clearly better up front.

The other 20-year-old I expect to be kept is Brandon Lockerby as Cepek really does nothing very well. He's a big body but doesn't use it unless going up against really small guys and even then he's often losing battles. If Pearson can replace the fighting and the defensive play, Cepek is expendable.

How many 16-year-olds can the team afford to keep and still remain competitive? In my opinion if they are better than the older players, keep them! Guys like Foster, Wruck, Rachinski and Stephenson look terrific so far... 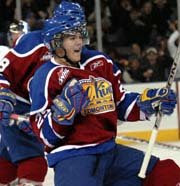 It might be a bit early to start predicting a breakout player for the season but I posed the question to GM Bob Green last week and he offered up Brent Raedeke's name. He'll be leaving Edmonton to attend the camp of the Detroit Red Wings including the Traverse City tournament. I offered up two names: Clay Cumiskey (pictured) and newly married Craig McCallum.

There definitely will be some tough decision to make out of camp and that's a good problem to have if you're the brain trust of the Oil Kings.
Posted by Guy Flaming @ 10:22 PM