The Roster Battle: The New Guy

I could have said 'disappointment' but I honestly don't know yet if that's the right adjective to describe Brule's NHL career. Certainly it's disappointing that he's not done more with the 146 games he's had but without the first-hand knowledge of how he was used, who he played with and his demeanor in Columbus, I'm still reserving final judgement.

Edmonton picked 25th overall in 2005 and came away with Andrew Cogliano, a player who looks like he could be a valuable piece of the Oiler puzzle for years to come. The Columbus Blue Jackets grabbed Brule 6th overall the same draft and expected that he was a player who would step right into their line up the following year and contribute at a high level.

Dean and I just had Gare Joyce on the show, he wrote a terrific book during 2006-07 called Future Great & Heartbreaks and in it he remarks a few times about how thrilled and excited Columbus was that Brule fell to them in 2005.

Clearly the word disappointment is a fitting one if you are looking at Brule from a Columbus perspective.

Recently I wrote a feature on Brule (see here) so I'm not going to go into great detail about him again in this series. We had Brule on the show a couple weeks back (see here) and we talked to him about his career thus far and how he feels about the trade to Edmonton.

"I took [the trade] as a big positive," he said, "I got the message in the morning and I was ecstatic, I jumped right out of bed because I couldn't believe that I'd been traded. It was good news for me and I was very happy."

Sounds to me like a guy who was hoping for a change in scenery (or simply a player saying the right things after a trade). Brule went on to say that he's viewing the deal as an opportunity at a fresh start.

"In Edmonton I think they're going to enjoy the way I play hockey," Brule said, "I play a pretty aggressive style, I'm a very fast skater and I think I can fit in alongside a lot of guys there that are the same type of players."

You wouldn't want a player with 146 NHL games under his belt to talk about a possible stint on the farm but if there is one thing I'll remember about this interview it's that Brule obviously wants nothing to do with the AHL.

"I wasn't playing too much [in Columbus] and things just weren't working out the same as they were the first year and I hope that Edmonton will give me more of an opportunity, that will be good for me I think."

"The NHL is the perfect thing for me right now, I need that challenge right now. Obviously the last two years have been a challenge but I'm looking forward to this year because I'm coming to camp in shape and I'm going to be more ready that I ever have."

There is no doubt that if Brule can be the player he was in junior, as effective as he was playing his own personal style, then the Oilers would be beside themselves with joy. Exceptionally fast, hard-hitting, sometimes nasty and yet still offensively talented. Here's a look at one of his more memorable hits from his WHL days with the Giants:

Why Brule will make the team: Gilbert Brule has several things working on his side not the least of which is experience. Of the players he's likely fighting with for a roster spot, his 146 NHL games is more than the rest of them have combined. That is definitely a fact that helps his cause.

His speed has 'Oiler' written all over him; it's the one trait that Edmonton has historically valued to a fault. 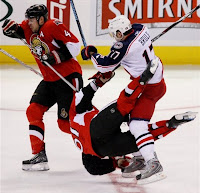 If you're looking to fill out a 13th forward spot then normally NHL teams will look to do so with a player that they can envision playing a 4th line role. Brule can deifnitely do that. With his combination of speed, sandpaper and physical play, he is an ideal energy player but with his still dormant offensive upside, he could be much more.

NHL comparisons I've been given range from the over-used Darcy Tucker-Sean Avery to Mike Peca. Yesterday I heard Robin Brownlee throw out a Theo Fleury suggestion which also makes a lot of sense.

With Curtis Glencross gone, and the obvious benefit a pest brought to the team when he initially came over, the Oilers would probably like to have that element available to them again. Brule can fill the role Glencross did in pretty much the same fashion.

Positionally Brule is a natural center but for the past few years he's played right wing. On the show he admitted that his preferance is in the middle but if he's asked to play on the wing he will. Versatility is a positive.

Let's call a spade a spade... players picked 6th overall get the opportunities.

Why Brule will not make the team: The prevailing vibe I'm getting from inside and outside the Oilers organization, which has become increasingly tight lipped, is that Columbus rushed Brule. He's struggled under expectations and as a result his confidence is shot. In my opinion it sounds like they feel Brule would benefit from time with the Springfield Falcons.

Right now Brule doesn't have to clear waivers to be reassigned but that will change once he's played 12 more games. Therefore, if they're going to send him to the farm it will definitely be sooner as opposed to later.

Aaron Portzline of the Columbus Dispatch described Brule as an introvert, shy and a bit of an odd duck. Individuals normally don't thrive in the Oiler system which has long been considered an unusually tight knit group. Brule told us that Ryan O'Marra and Cogliano were the only two Edmonton properties that he has much past experience with. Time on the farm getting to know the rest of the guys might be viewed as a plus.

Would he be negatively affected if he's a healthy scratch? I think he would from a mental perspective. I think his development needs him on the ice and I would argue that playing big minutes in Springfield would be better for him than sitting in the pressbox. However, of the guys he's competing with, I'd suggest that with Brule's NHL experience already in hand, he could sit more than some others could without it being as much of an issue. The mental side of not playing for his new team, one he described as a fresh start, that might be tough for him to take.

Bottom Line: Brule is definitely in the mix and brings a different bag of tricks with him to the show. Pretty much the only thing he shares with Rob Schremp is the fact that as junors, both were offensive powers. Brule's speed, aggression and personality are a stark contrast to Schremp's and yet both are in solid position to make the club.

One final thought - Barring a lights-out performance at camp, I personally believe the Oilers would like to send Brule down. They'd be taking advantage of the small window of opportunity before waivers kick in plus they'd be giving him a major role with the Falcons and a lot of opportunity to succeed in the process thus hopefully getting his offence and his confidence back. BUT... I don't get the impression that Brule would take to that idea very well at all; after nearly 150 games in the NHL to be sent down now? It might be too bitter a pill to swallow.

Therefore I wonder if Edmonton keeps him around simply to avoid the possible headache reassinging him could create. Lots to consider. lots to learn and impressions still to be made but that's how I see it right now with The New Guy.
Posted by Guy Flaming @ 3:23 AM

They'd be taking advantage of the small window of opportunity before waivers kick in plus they'd be giving him a major role with the Falcons and a lot of opportunity to succeed in the process thus hopefully getting his offence and his confidence back. BUT... I don't get the impression that Brule would take to that idea very well at all; after nearly 150 games in the NHL to be sent down now? It might be too bitter a pill to swallow.

Therefore I wonder if Edmonton keeps him around simply to avoid the possible headache reassinging him could create.

I think they send him to the minors; I also think that if he gives them any guff about it they point to his NHL career so far and make it clear that it's in his best interests.

I always thought the trade was more about moving Torres than who they acquired. With the salary Raffi was about to start to get from the Oilers the chances of him earning it or outperforming it were extremely slim. Add in the constant 'lifestyle' rumours and all the talk about how this new group of kids have their heads on straight etc. and it just seemed like they didn't want Torres mixing with them either. Just my impression. So they traded a 5th overall disappointment who is now 26? for a 6th overall disappointment who is 21? to clear cap space, reshuffle the dressing room, and take a flyer on maybe upgrading the position for next year or later this year and if Brule doesn't work out the Oilers still think they did the right thing by getting rid of Raffi's contract.

I say he starts in the minors and the Oilers tell him to like it.