The Roster Battle: The Fan Favourite 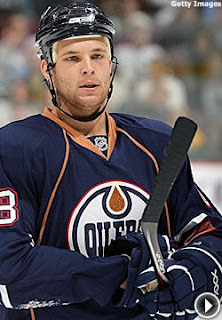 I've been covering the Oilers prospects since 2002 and I can say without hesitation that when it comes to young players who can polarize the fanbase there hasn't been anyone like Rob Schremp.

He was drafted back in 2004, became a dominant OHL player over the next two seasons, turned pro with a so-so debut but took his game to a new level last year finishing inside the top 10 of AHL scoring. For some that's a career path that indicates a somewhat late bloomer making the adjustment one level at a time. Others see Schremp as a player who will just be another in the long line of junior stars who fail to stick in the NHL (see Peter Sarno and his back-to-back +120 point OHL seasons).

Schremp got his OHL start with the Mississauga IceDogs and in his 16-year-old season he finished second in team scoring with 26 goals and 74 points. A 17-year-old Patrick O'Sullivan led the IceDogs that year with 81 points. A dispute between Mississauga's brass and Schremp's agent led to a much publicized trade demand and the beginning of the "bad attitude" labelling that the player is still trying to shrug off. 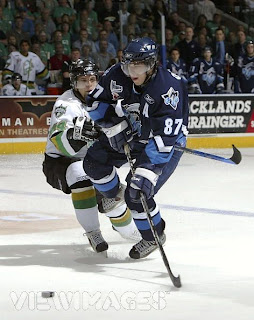 The London Knights gladly took Schremp on and the already talented squad became a powerhouse for the next 3 seasons. The Fulton, NY product was a key player during London's record breaking season in 2004-05 and the Memorial Cup title that year as well. Schremp's six points in the year-end tournament was second only to Corey Perry's seven as the host team downed Sidney Crosby's Rimouski Oceanic in the final.

The 2004 Draft pundits were equally split on Schremp's worth. ISS considered him a sure-fire top 5 pick citing him as the 3rd most talented player available behind Alex Ovechkin and Evgeny Malkin. Redline Report wasn't nearly as supportive and were leading the charge when it came to the "Schremp has attitude" critiques.

In August of 2004 I conducted a nearly hour-long phone interview with Schremp for a feature I was doing at Hockey's Future. Schremp was training in Chicago with other players who share the same agent, LA Kings forward Dustin Brown being one. The purpose of the interview was simple; find out one way or another exactly what kind of kid this was and put the attitude to the test. Schremp spoke candidly and didn't shy away from direct questions. I'll admit I baited him a few times, (asking him about being benched in the OHL playoffs for example) just to see what reaction I would get. You can read that feature here.

I'm a big fan of Stephen King, the author most identified with classic chillers like Carrie and IT while his best work is more often the source material for movies like The Shawshank Redemption, The Green Mile and Stand By Me. I remember reading a review that someone had given to King's The Dark Tower series which was short but memorable: "The world is divided into two groups; those who love The Dark Tower books and those that haven't read them yet."

When I hear people say that Rob Schremp has attitude problems I always think about that book review. Those who believe Schremp has an attitude problem haven't taken the time to talk to or get to know the guy. I've talked to coaches, teammates and trainers both past and present and have yet to have a single person describe Schremp to me as a problem. Not one. Period.

Now before this turns into a full fledged love in... Schremp is not perfect.

He's charismatic and engaging, walking the line between confident and cocky. When he was younger he was impulsive in what he said in interviews and on the ice he wasn't much different. One night he borrowed a gulp of water from the opposition goalie's bottle. He's kayak-ed down the ice after socring a game winning shootout goal. In a playoff game he lost his cool and, depending on who you ask, either fired the puck at the other team's bench narrowly missing the coach or else he slapped it at them harmlessly along the ice. This audio-less Youtube video popped up showing Schremp apparently attempting to gut a Kitchener Rangers fan:

But what it didn't show was that the fan had gobbed on Schremp as he was leaving the ice. The end result just gave the critics more fuel to add to their fire. 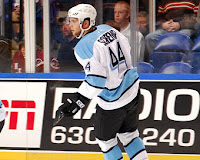 Schremp eventually turned pro and spent 2006-07 with the Wilkes-Barre Scranton Penguins. He had 53 points in 69 games which isn't bad considering he was a healthy scratch upwards of half a dozen times that year. It was a learning year for Schremp who had believed he would stick with the Oilers out of training camp. A late season knee injury kept him out of the playoffs and also kept him off the training schedule that he'd need to follow before reporting to Edmonton for a chance of making the team in 2007-08. He was cut again and spent all but 2 games in Springfield with the Falcons where he notched 76 points in 78 games.

Rumors of a potential European option surfaced but were quickly shot down by Schremp and agent Scott Norton. Norton's comments seemed to indicate a level of expectation by agent and player alike that Schremp's minor league days are now behind him and with the depth of the Oiler roster in May, the speculation that a trade around the draft became popular discussion.

However, Schremp was not dealt and has instead dedicated himself to a rigorous off-season training schedule in advance of this coming September's NHL training camp.

The question becomes: Is this the year Rob Schremp makes the Oilers out of camp?

Going back to the scenario I outlined here where there are two forward spots available, you have to believe that Schremp's chances are very good. 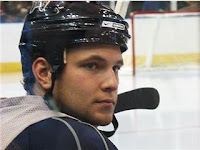 Why Schremp will make the team: After two years in the minors he has adapted his offensive game well enough that he was the go-to guy at the age of 21. He's done everything that's been asked of him at the minor league level including making an adjustment to LW, a position he'd never played before last year. It may have taken him a little longer than Oiler fans had hoped but Schremp has proven that his offensive abilities were not left in London.

The knock on Schremp the hockey player has always been two-fold; 'not fast enough' and 'doesn't compete hard enough'. If after this full summer of dedicated workouts under the care of the team's fitness coach and several Oiler veterans Schremp isn't in the best shape of his life then something is wrong. Captain Ethan Moreau recently told listeners to Bob Stauffer's Total Sports that he was impressed with the effort Schremp was putting into getting ready for the year. Coach Craig MacTavish also said he'd heard good things about the player's progress.

In conversations I've had with Schremp he's indicated his belief that the strength and conditioning work he's done in California will address his speed. During his July 8th appearance on The Pipeline Show Schremp made his ambitions for the season crystal clear when he said "Enough screwing around, I want to play in the NHL... I don't want to be a minor league player anymore." If he can show that same desire and drive on the ice then he'll be one step closer.

Why Schremp will not make the team: Three things stand in the way of Schremp and the NHL; Politics, competition and himself. He can only control the latter and as previously described, he seems to be doing his best to prepare this summer.

The competition will definitely be fierce hence the reason I'm doing this little series. As I outlined in the prologue, I see it as a 5-man race for 2 spots so Schremp cannot afford to slack off during practices and will have to contribute in the exhibition schedule not matter who is on his line. Andrew Cogliano, Sam Gagner and Kyle Brodziak all made the team out of camp last year and all, at some point, played alongside non-scorers and still found a way to impress.

By politics I mean contract status. Schremp is entering the final year of his entry-level deal and is still waiver-exempt... which weighs the scale against him. If the battle is tight, if Schremp hasn't clearly distanced himself from the others vying for the job, the team can send him down without risk and historically that's what they've done.

Finally, the last hurdle in Schremp's way is simply convincing the organization that making the team as the 13th forward, not playing every night but practiving every day in a NHL environment with NHL players is better than playing a ton in the AHL. It's a tough sell because most NHL execs I've talked to feel playing is better than watching. It could be a case where Schremp is sent down to the Falcons where they know he'll be the top dog, play 1st power play and bide his time waiting for a hole with the Oilers to open that gets him a recall.

There is no question that Oiler fans want to see Schremp on the team sooner rather than later. In a recent poll on our show's website Schremp was the runaway pick by fans when asked to name their 13th forward. No surprise really, he's always been The Fan Favourite.
Posted by Guy Flaming @ 10:17 PM

Great article Guy, any word if Gagner and Schremo will be linemates in their European tour?

Any word on JF Jacques health?
Thanks, Bryan

Jacques was on Total Sports with Bob Stauffer and Georges Laraque last week, maybe the week before, and declared himself fit and ready to go at camp.

I have zero details about the Knights trip to Europe.

Dont know how I missed it earlier... Sure hope he makes the team!