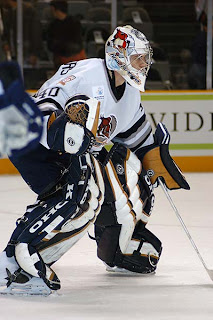 The goalie in the picture is Jeff Drouin-Deslauriers, or I should say it was. These days he's just Jeff Deslauriers and he's not sporting the Edmonton Road Runners gear anymore either. I actually still like those sweaters though... not the logo but the colour scheme worked for me.

Anyway, the reason I slapped ol'JDD up here is because he's one of the guys who could very well have an impact on which forwards make the Oilers out of camp. Or maybe more accurately, how many forwards make it. Let me explain.

Over the next few weeks I'm going to talk about the battle over the last couple roster spots as training camp is now about 45 days away.

First I want to remind you that of the 23-man roster there is the very real possibility that the Oilers could have 3 goalies and 8 blueliners, although in that case they'd likely consider Jason Strudwick the 13th forward. Casual fans might forget that Jeff Deslauriers and Mathieu Roy are both in the situation where they would need to clear waivers to get to Springfield in the AHL. Both might pass through unclaimed... but it's a risk and no team wants to just give away assets. It's easier to sneak someone through waivers early in the season - see Patrick Thoresen last year who made it through before Christmas but was scooped up by Philly in the second half.

Unless the Oilers (1) find a taker for Dwayne Roloson's contract either through trade or waivers or (2) try and push JDD back through waivers to the farm... Edmonton will have 3 goalies.

For the sake of argument, let's say they do manage one of the above and also find a way to only carry 7 defenders leaving room for 4 full sets of forwards and the normal 13th and 14th pressbox spots up front.

I am going to go out on a limb (note the sarcasm) and declare 11 of the forward spots already clearly taken. Yeah I know, really a tough job there. Cole, Horcoff, Hemsky, Penner, Gagner, Nilsson, Cogliano, Moreau, Pisani, Brodziak and Stortini are givens.

In my opinion, so is Marc Pouliot and his nice new, bargain basement contract. He'd need to clear waivers to go down (and he wouldn't make it through anymore) and really, you need cheap forwards to round out your bottom 6 so Pouliot... at the very least has a spot waiting for him to claim outright in camp - not the first time he's had that and failed but this year waivers are on his side.

The last 2 spots (if they aren't claimed by the 8th D-man and 3rd goalie) are up for grabs and in my mind it's a 5-man battle. 5 different players; different ages, different talents, strengths and weaknesses, different contract situations and different expectations.

The Fan Favorite, The New Guy, The Wild Card, The Forgotten One and the Underdog.

I'll break them down over the next little bit.
Posted by Guy Flaming @ 1:05 AM

Email ThisBlogThis!Share to TwitterShare to FacebookShare to Pinterest
Labels: Oilers

One point on JDD - if he plays about another half season in the AHL, he's no longer required to go through recall waivers, so they can always bring him back up halfway through the season.

One point on JDD - if he plays about another half season in the AHL, he's no longer required to go through recall waivers, so they can always bring him back up halfway through the season.

I hadn't heard that before. Why would that be?

In the CBA, section 50.9(g) it deals with recall waivers. It has an exception for "Veteran Minor League Players".

For goalies, this is defined as a player with 180+ games of pro (NHL + AHL + ECHL) experience, and less than 40 NHL games experience the prior year (or 80 in the prior 2 years).
Couting up all his stops in Greenville/Hamilton/Roadrunners/Stocton/Wilkes-Barre/Springfiend (good lord), he has something like 139 pro games.

Hrmm. Ignore the part where I managed to misspell both Stockton and Springfield in the above post.