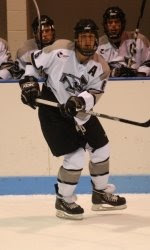 The Pipeline Show has learned that the Edmonton Oilers have come to terms with collegian Cody Wild and will announce the signing on Tuesday. The former Providence Friar will dress and make his AHL debut on Wednesday when Springfield hosts Manchester.

As I first discussed at Hockey's Future in the recent Top 20 release and then more so yesterday, Cody Wild has been on the minds of the Oilers for several weeks now. With mass injuries depleting their supply of defencemen at both the NHL and minor league levels, it has exposed the types of players in the system. In short, not enough puck movers, especially in Springfield.

Conversations with those around the AHL club pin point the team's habit of being badly outshot to one thing; an inability to get the puck out of its own end.

Springfield's backend is dominated by defensive players like Bryan Young, Theo Peckham, Rick Berry and Allan Rourke. The club has been forced to go out of its way to sign league castoffs to try and fill the void but the Mike Gabinets and Kenny Smiths of the world aren't getting it done.

With Providence College's one-sided loss to Boston College last weekend in the Hockey East playoffs, it left Cody Wild with a decision to make; return for another season or go pro and get a start on his major league career and again, my sources confirm it's a done deal.

Wild is exactly the kind of player Springfield is missing, an offence first defenceman who can carry the puck out by himself or make the outlet pass if it's open. It will give the Falcons and head coach Kelly Buchberger a dynamic they haven't had since the underachieving Danny Syvret was cast aside.

The 20-year-old set new career highs in points (22) and assists (18) this year in 32 games, the fewest played in his 3 seasons spent with Providence. His sophomore year was ravaged by injury, a torn labrum that required off season surgery. Wild is an offence-first blueliner almost to a fault as the knock on him is that he's often too eager to attack leaving his own end vulnerable.

Comparisons range from Tom Gilbert to Jordan Leopold with one source saying that Wild's tendency to rush with the forwards is not unlike Joni Pitkanen's style although the overall skill level is clearly not the same.

Wild is the first, Taylor Chorney may very well join Springfield once North Dakota's year has come to an end as well, either the last weekend of March or at the conculsion of the Frozen Four on April 12th.

NOTE: Cody Wild and fellow Oiler prospects Jeff Petry and Riley Nash will appear on The Pipeline Show Tuesday March 18th between 7-9 PM (MST). You can submit your questions to these players by sending an email to: pipeup@thepipelineshow.com
Posted by Guy Flaming @ 10:39 PM

Guy wouldn't the 50 contract limit prevent the Oilers from bringing Chorney to Springfield?

They dumped one contract with Thoreson, but does Wild not fill that space?

PTO contract for Wild, as is the case with all juniors/collegians who conclude their season and sign with their respective pro clubs. I do not believe they count against the 50 limit. Also, they are not counted against the AHL "Clear Day" roster.