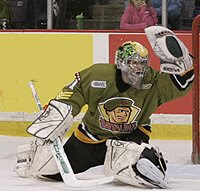 It's come to the attention of The Pipeline Show that netminder Bryan Pitton will join the Springfield Falcons in the middle of this week.

Pitton's club team, the OHL's Brampton Battalion, were upset in their opening round playoff series against the Barrie Colts. The Colts beat Brampton by scores of 3-1, 3-2(ot), 2-1(ot) and 2-0 while only dropping the third game in the series by a lopsided 5-1 score.

Pitton, despite only getting one win, had the 5th best goalie stats (amongst starters) through the opening round ahead of the goalies from Belleville, Sault Ste. Marie and Sarnia who combined for a 12-1-1 record. The Brampton keeper went 1-2-2 but had a stellar 1.80 goals against average and .938 save percentage through the first round.

The Pipeline Show has learned that Pitton will join the Springfield Falcons on Tuesday but it is unclear at this time if he will see any action or even dress. Currently, Springfield co-starter Jeff Deslauriers is in Edmonton leaving Devan Dubnyk to carry the load. Stockton Thunder goalie Glenn Fisher has been recalled but may return to California to rejoin his club in the midst of their own playoff drive.

This will be an interesting summer for Pitton who must be signed by the Oilers before June 1st or he will return to the draft pool and be up for grabs again. Pitton was an OHL All-Star this season after helping lead Brampton to a second place finish in the league's Eastern Conference.

Recently on The Pipeline Show Oilers GM Kevin Lowe admitted that post season performance would factor into Pitton;s future with the team.

"We're monitoring his play in the playoffs quite closely to see if he's a player that we're going to be interested in signing," said Lowe.

Clearly if there is competition for what, at this point, liely be the Stockton Thunder job next season it would come down to Fisher or Pitton. Fisher is nearing the end of his contract and it would seem probable that if he is back with the organization next year it may be on a strictly minor league deal so as not to overload the 50-contracts rule with goalies. It is conceivable that Pitton would be asked to do the same but in my opinion, that is less likely.

For more on this story, Bryan Pitton will be a guest on The Pipeline Show this coming Tuesday night.
Posted by Guy Flaming @ 9:03 PM