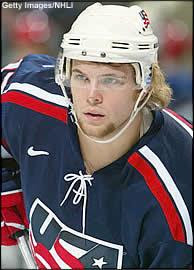 The title says it all really.

Just a few minutes ago I spoke with Scott Norton who is the agent for Rob Schremp as well as other NHL players like Dustin Brown and Zack Stortini. Here's a transcription of that fairly brief conversation.

Flaming: I just wanted to touch base with you about this Sweden story and see if from your end it's even a story at all.
Norton: I can tell you from my end that it's not a story at all. I have had no contact with anyone in Sweden, Japan or anywhere else. There was some contact [to Schremp] on the internet, no idea who it was, asking if he'd be interested in going to Europe in the future and Rob being like anyone said "Sure, I don't know". We still don't know who the guy is whether he's an agent over there or a local yokel and all of a sudden one thing snowballs into another. Rob told me about the contact with this guy about a month ago but he'd stopped talking to the guy by that point. Then I get a call from one of the Oiler scouts yesterday asking me about this article on the internet. It appears to be one over eager person trying to make a name for himself off of other players, I don't know the other player involved or how much significance that has to it but in terms of Rob I can tell you that I've had absolutely no talks with anyone over in Europe.

Flaming: So Parenteau isn't even one of your guys?
Norton: No.

Flaming: Interesting.
Norton: It's obvious that Rob's not happy or satisfied with the situation. We'd obviously like to be in a different spot [as opposed to Springfield] whether it be Edmonton or on another NHL team I don't know but, we think he's proven himself at the level that he's at and hope he gets the opportunity but that's where everything stands at this point.

Flaming: Fair enough, sounds like the Sweden story is a non-story then and I can quote you on that?
Norton: Yes, that's fair. If there's any follow up from either end just let me know.


There you have it, take from that what you will. For the record, my conversation with Schremp yesterday also included the theory that the rumor may have begun via internet contact from an unknown person but I didn't think it worthy of mention until Mr. Norton further explained what happened.

I've actually heard that this is a growing problem for atheletes and celebrities in all walks of life who have accounts on MySpace.com or Faecbook or other such sites. While some players don't spend much time answering fan mail or responding to correspondence over the internet, some do. Georges Laraque is a prime example and Rob Schremp is another. It appears that in this case, this whole story may have stemmed from a simple response to a fan asking Schremp if he'd ever consider playing in Europe.

The only person involved in this "story" who I haven't spoken with is the Swedish "source" in the original article. Perhaps that's the next step, if there is even a point to taking another one.
Posted by Guy Flaming @ 1:49 PM

"Inside Redhawks" is blog from journalist Kent Jönsson at the Swedish newspaper Sydsvenskan.

His email should be:
kent.jonsson@sydsvenskan.se

The story/blog was edited on March 29 and now speaks only about Schremp and Parenteau as talents who haven't received the chance in the NHL and could consider Sweden.

It now reads as purely speculation and without any substance.