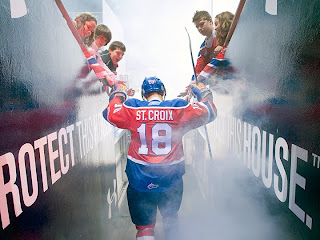 Part one of this series was released back in Mid-March with a look at how the scouting community views Oil Kings forward Dylan Wruck. Since then, the once un-ranked Wruck has seen his stock soar and is now slotted in at #99 by Central Scouting on their final rankings.

The second part of the "Pickin' Brains" series asked scouts to name the top WHL defenceman from the Class of 2011. It appears to be a two horse race between a pair of products from Sherwood Park, Alberta.

WHL goaltenders were in the spotlight in Part 3. Who is leading the list of pipemen that are eligible for the 2011 draft? The answer to that question might not be the same as the goalie from the league who gets chosen first.

Today it's another Edmonton Oil King under the microscope as we pose Question #4: Is Michael St. Croix on your 'wishlist'?

I asked 10 scouts from 10 different organizations and here is what they said: 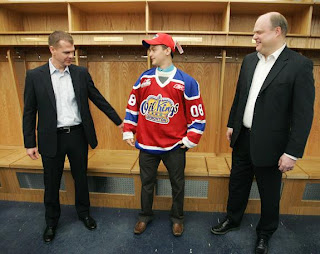 He was Edmonton's first round pick, 4th overall, in 2008 and has become the young franchise's record holder for points earned as a member of the team. St. Croix scored 18 goals as a 16-year-old rookie and ended the 2009-10 season with a respectable 46 points. The Oil Kings were obliterated by illness and injury that year and limped to a 21st place finish. After deadline trades of Tomas Vincour (DAL) and Brent Raedeke (DET), St. Croix ended the season as the club's leading scorer.

The Winnipeg native was expected to lead the team again in 2010-11 and for much of the year he was exactly that; the offensive catalyst on a vastly improved Edmonton team. However, he didn't finish atop the team scoring list - that honor went to Dylan Wruck.

The year began on a down note for St. Croix as he failed to make Canada's entry to the Ivan Hlinka Memorial tournament in August. He injured his shoulder at the camp in Calgary but played through it in order to make the team but couldn't perform well enough to secure a spot.

"He disappointed me at the U18 camp last August but then you find out that he was playing with a dislocated shoulder," one scout said to me, "People thought he looked soft there but why wouldn’t he when he was injured and trying to play through the pain?"

The injury hampered him at oil Kings training camp as well but didn't prevent him from starting the regular season.

St. Croix was good early on in the schedule. He had 10 points after 9 games but the team was struggling. A trade of netminders with Kamloops in early November seemed to breathe new life throughout the line up and the club's fortunes turned around for the better. 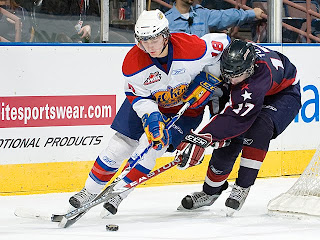 Suddenly many of the Oil Kings began producing like crazy and the team looked like world beaters. And leading that charge was St. Croix. From October 31st to December 31st, there was no way to stop him; he piled up 37 points in 23 games and was held off the score sheet just four times in that span.

January was a tough month though for the skilled forward. First came the disappointment of not being invited to take part in the CHL Top Prospects Game. He'd been ranked fairly low by Central Scouting early on in the year but most thought that his hot streak would have been enough to earn him an invite but it wasn't meant to be.

His production dropped significantly and some I spoke with openly wondered if the Top Prospect snubbing was a blow to his ego that was affecting his game. Then, in a game in Brandon, he sustained a head injury that sidelined him for 10 days. Upon his return he appeared out of synch and tentative. It wasn't until mid-February where he started to resemble his 2010 form.

St. Croix went on a 10-game scoring streak to close out February compiling 18 points. As the team entered the playoffs with a first round meeting against Ryan Nugent-Hopkins and the Red Deer Rebels, everyone knew the heavy underdogs would need a huge performance from the key Oil Kings to have a chance. Unfortunately for Edmonton, St. Croix only managed 1 point in the 4-game series and only 20-year-old Jordan Hickmott registered more than 2 points.

When NHL Central Scouting's final rankings came out, several Oil Kings players were pleased to see their names much higher on the list than they had been at the mid-term mark. That wasn't the case though for St. Croix who dropped from 36th to 59th; an early 3rd round ranking.

Some believed that St. Croix would make Canada's entry to the World U18s but the only Oil Kings player to get the call was another center, Travis Ewanyk. St. Croix was passed over for lower ranked forwards Colin Smith (#96), Nick Cousins (#71), Brent Andrews (#129), Alan Quine (#72), and Austin Brassard (#64). 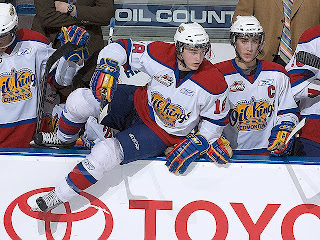 St. Croix is decent in interviews but I can't shake the gut feeling that he's really been coached on how to conduct himself and what he should say. Again, that's just instinct on my part but I think that somewhere along the way he's heard the criticism that he's not always a 'team guy' because this year he'd go out of his way in interviews to share credit with his teammates for his personal success. On the surface, that's what most players do, and should do, but at times it comes across (to me) as a manufactured response as opposed to being genuine. Here is a link to his appearances on TPS in November and again in early January.

But what does the scouting community think? Did the 5'11, 176 lb center get a raw deal this year with the Top Prospects Game and his final ranking by Central Scouting? Is this a player that scouts will fight for in their team meetings?

"He’s got very good hockey sense... he shoots the puck better than most people think, he can really wire it, and he’s pretty smart."

"He’s not a big center but he still goes to the right places and he has pretty good hands. He thinks the game well and his effort is usually there."

"He has crazy skills around the net. His work ethic is good on most nights. He sometimes plays too much on the perimeter but when he does go to the net, he drives there with speed."

"He sure knows what to do with the puck when he’s got it and that’s an ingredient that all teams look for; great hands and a good finisher."

"Very smart player, he’s a guy that has good hockey sense and works hard most nights. It’s tough when you are 17 to be the guy expected to carry the offence for the entire team."

Here is a quick sampling of his work including the goal that would eventually rank #1 on the WHL's Plays of the Year:

"I think with Michael there are concerns about his compete; he’s not a physical player. I have some concerns with him."

"I think the biggest knock on St. Croix is always going to be his skating."

"What’s going to hurt him is his foot speed and his ability to get into the tough zones and fight for a puck."

"He has trouble beating someone one-on-one or winning a race to a loose puck."

"He needs space to play and he can’t create it for himself. When he gets hit, he’s hit, he doesn’t have the ability to roll off a hit and use the momentum for himself."

"I’m not a fan. I keep trying to figure out what it is that I don’t like... I see a lack of defence and neutral zone play, I never see him with the puck, it’s just a touch pass off his stick. I think he’s an average skater."

"He is to the Oil Kings what Chris Drury has been to all his teams in the NHL - never the main guy on a team but a dangerous piece to a bigger puzzle."

"It's very tough to compare him with anyone. The guys with his skill level, or the level you might project Michael to play at one day, are so much better. He might be another Scott Gomez but he would have to really round out his game more."

I'm not sure that skating has ever been considered a weakness for either of the above players but it would be aspects of each that St. Croix shares. Drury was a 3rd round pick in his draft year so that certainly is a workable comparable. I think it's fair to say that these would be projects should St. Croix reach his full potential.

The scouts seemed to be split into two categories; those who wonder where he will fit into a professional roster and those who are taken by his skill set and willing to overlook his deficiencies because of it.

"His game will have to evolve so he’s not bringing just offence to his game."

"If he’s going to make it at the next level it’s going to have to be as a point producer because he’s not a checker. I like his effort but all through his hockey career he’s always been the point guy.

"I think he’s an early 2nd rounder because of his skill level and that skill will dry up pretty quickly at this draft."

"He's a mid-2nd rounder for me but I have concerns because of his injuries."

"I think he’s a second round pick and I would take him there depending, obviously, on who is still available." 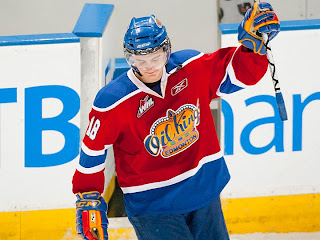 No one suggested to me that St. Croix won't get drafted or that they wouldn't select him at some point. That said, I clearly got the sense that if he goes in the second round it may be to a team "reaches" a bit to take him. Other teams will be pleased because that means someone they liked will still be available. I think a reasonable over/under for him would be 50th.

I had the opportunity to watch Michael only two times in Winnipeg as a midget. 10 minutes each time. I really couldn't understand the hype. He really didn't stand out for me. Kind of there, waiting, coasting and then "bang" the puck was in the net. At the time I thought he was like a Cobra, docile but deadly. I have followed his career with interest ever since. His instinct and ability to anticipate a play remind me of Wayne Gretzky. Please, I am not saying he is the next "Great One", another small center, not the best skater and not that physical. I do think Michael St. Croix will provide a lot of great entertainment for NHL fans throughout his career. Good luck Michael. I think "The Cobra" is a great nickname.