Kootenay on the Verge 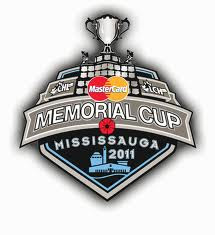 There are two ways to look at the situation that the Kootenay Ice currently find themselves in. The first, call it the half-glass-full version, has the WHL Champions with the possibility of being just the second team ever to come back and win the Memorial Cup after losing their first two games. The second, and probably more realistic, is that the Ice are perilously close to going 0-3 at the Canadian Hockey League's showcase event.


Kootenay's 2-1 loss to Mississauga on Sunday evening was a tough one because the game was close enough that it really could have gone either way. etminder J.P. Anderson (SJ) was, in my opinion, the difference in the game and that's not to suggest that Nathan Lieuwen was a negative for the Westerners. But when the San Jose netminder was under fire, which wasn't overly often, he was equal to the task and I thought he had to be the better of the two goalies on the night. Both netminders made 32 saves, that's how evenly matched the Ice and Majors were.

Kootenay's problem so far in the tournament has been obvious; 1 goal in two games obviously isn't going to produce wins. It's a bit of a surprise to me because, despite their reputation as a defence-first team, the Ice's 272 goals this season were 7th most in the WHL so it's not as if the team can't score. They just haven't been able to yet. 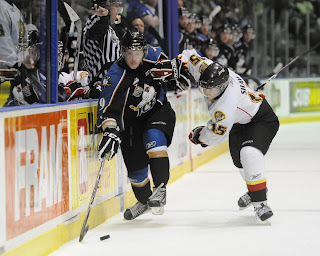 Kootenay's lone goal has come from the stick of their best performer so far, Cody Eakin (WSH). His two-way game has been every bit as impressive as it was during the World Junior Championship in Buffalo last January. However, the team as a whole has to find a way to get more sustained pressure, better (not necessarily more) shots on net and I don't think the Ice have been as tenacious in their pursuit of the puck as we saw in the WHL playoffs.

Their final round robin game is on Tuesday night against the high-flying (and high scoring) Saint John Sea Dogs so you know Kootenay is going to have to find their offence for that one. Otherwise, it will be a disappointing three and out for the WHL representative ending the league's 4-year run of reaching the Memorial Cup finals.

Brayden McNabb (BUF) served his 1-game suspension for the elbow to Owen Sound's Joey Hishon (COL) so at least the Ice know that they'll get their captain and blueline anchor back for Tuesday.