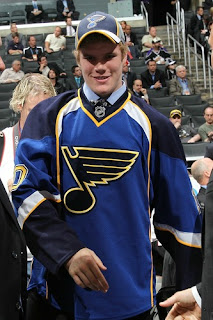 Max Gardiner has left the University of Minnesota after just one season because of a lack of playing time. That according quotes from Gophers head coach Don Lucia in an ESPN story here.

The St. Louis Blues 3rd rounder has 3 options available to him hockey wise: He can turn pro which won't happen. He can play in the USHL after being recently drafted by Dubuque, that story is here. Or he can head to the WHL and suit up for the Tri City Americans who listed him in the fall of 2009.


"We talked to him last year when he wasn't playing a lot, met with his dad and his agent and just let them know that we were interested and let them know about our program," said Tory, "We take a different approach, we don't do the hard sell, we respect the decisions and the commitments that players make. Our approach is to let them know that we're here, that we feel we have a program that can help them get to their destination. At the same time we understand that those are difficult decisions so we leave them alone."

"This will be a decision made between Max and his family," said Tory, "I'm sure St. Louis would be involved in that as well. We'd love to have him on our hockey team, there's no question about that, because he's a a good quality player and we think that we can help him move toward pro if that's where his ambitions are."

The Blues could in fact have 2 prospects playing for the Americans in 2011-12, as 2009 first rounder Jaden Schwartz is also property of Bob Tory's club. Several sources have heard strong whispers that Gardiner will in fact land in Tri City this year, while Schwartz is said to likely play in the AHL to start and could possibly be shipped to the WHL at some point next season (see Jerry D'Amigo with Toronto and then Kitchener).

"If I had a perfect wish list I'd have Jaden Schwartz and Max Gardiner on the same line," Tory stated.

Tri-City actually has listed a number of talented NCAA players over the last few years, enough that Tory joked he could be competitive in the collegiate circuit too. Aside from Schwartz and Gardiner, the Americans also listed Justin Faulk (2nd Rd, CAR) who was an outstanding freshman at Minnesota-Duluth, Zach Budish (2nd Rd, NSH), Matt Nieto (2011 freshman at Boston University), goalie Zane Gothberg (6th, BOS), Justin Holl (2nd, CHI), Brock Nelson (1st, NYI) and others still in high school. Former Boston Bruins 1st rounder Joe Colborne (TOR) was also listed by Tri-City while still junior eligible as was Nick Leddy, the former Minnesota 1st rounder who made his NHL debut this year with Chicago.

"I could have a pretty good college team if I could form my own school and put all of those guys on one team," he kidded, "We could have a chance at going to the Frozen Four. Even my coaches are ex-NCAA guys so it would be perfect."

Regardless, Tory believes that his club would be an excellent fit for Gardiner but will give the player the space he needs to make the decision with his family and agent.

"We've touched base with him and his agent and let them know that we're an option for him if that's something that interests him," Tory summed up.

Dean, Recently Jaden Schwartz said recently he was returning to C.C. but I suppose that could change if he gets some push from his team that signed him.