Canada's GM is Kevin Lowe is also president of the Edmonton Oilers, the same NHL team that just won the draft lottery and will pick 1st overall in June.  After selecting forwards with their first pick in the last five straight drafts, many thought this would be the year the Oilers would address the blueline. Does the lottery change anything?

I had a casual conversation with head scout Stu MacGregor a few weeks ago on the philosophy of trading back in the draft as opposed to simply taking the player you want even if he's ranked or expected to be available later.

While he didn't tip his 2012 hand in the slightest, he did make the point that there is a significant risk either way. You can trade down and cross your fingers that the player you hope to get is still available but there is no guarantee that it will work out. Or you can simply nut up and take the person you want and hope that the guy(s) you passed on don't make you look stupid later.

Phoenix's 5th overall selection of Blake Wheeler in 2004 was a stunning move and while he never played for the Coyotes, he's been a quality NHL player for most of the last five seasons. Meanwhile, the Los Angeles Kings have yet to benefit from their 2007 leap of faith when they reached for Thomas Hickey 4th overall.

That conversation with Stu MacGregor took place before the lottery though and you could argue that picking 1st overall may change things.

While the vast majority of draft publications feel that Russian forward Nail Yakupov is the best player available in the Class of 2012, Millard's discovery has definitely got people talking.

"Wow! That would be a great experience for him! Forget Yakupov, Oilers: we NEED Murray! #IdTakeNiedermayerOverOvechkinAnyDay" tweeted one fan.

"Much safer bet [than Yakupov]. Never know what you will get with the Russians and Murray is a western boy - White City Sk" tweeted another.

"Don't hand #1 to Yakupov yet... If Murray goes to the WC and plays well, it gives them something to think about. Yakupov shouldn't be a slam dunk" tweeted our friend A.J. Jakubec, voice of the Ottawa 67's. 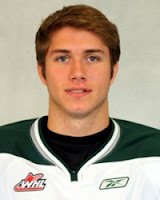 Ryan Murray has an already extensive history with Hockey Canada including the 2010 and 2011 U18s as well as the recent 2012 U20 World Junior Championship. He also played on the 2010 Ivan Hlinka team.

He is the captain of the Everett Silvertips and finished the 2011-12 season with 31 points in 46 games after missing 6 weeks due to injury and another stretch while in Alberta in the WJC. The 6'1, 195 lb blueliner is ranked 2nd overall among North American skaters by NHL Central Scouting. Murray wrote a blog for us earlier this season which you can read here.

NHL comparisons for Ryan Murray that have been made by guests on The Pipeline Show that have included Scott Niedermeyer, Mark Howe and Ray Bourque, all of them Hall of Fame caliber players. Lofty expectations indeed but it's that kind of player that is missing from the Edmonton Oilers organization right now.

Is Edmonton's "need" for a Ryan Murray enough to make him the BPA from Edmonton's perspective? I think it's too early to know for certain but maybe the World Championship is the final litmus test that will determine their plan at the draft.
Posted by Guy Flaming @ 1:08 AM