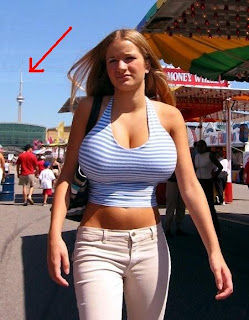 
There's a perception out there that NCAA hockey and Canada go together like cats and dogs; college hockey is for Americans while Canadians stick to Major Junior. Reality is much different than that though - there are plenty of Americans choosing the CHL, more every year, and the Canadian content of NCAA rosters hovers between 25-30%. What's more is that this is not a new development, it's been happening on both sides of the border for a long time.

What is new though are the upcoming plans that will see NCAA hockey, both on and off the ice, crossing the border beginning in April. 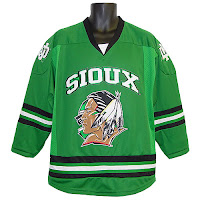 It was announced fairly recently that next season will see North Dakota and Nebraska-Omaha playing a weekend series in Winnipeg, Manitoba. This won't be an exhibition but a mid-season clash of WCHA opponents shortly after the World Junior Championship is completed in January 2012.

On the surface many people might be confused. Will people in Winnipeg care about this at all?

The answer is yes. There is a large following for the Fighting Sioux in Southern Manitoba and considering Grand Forks is a reasonable driving distance from Winnipeg it's reasonable to expect a number of cross border fans showing up. Not unlike how Canadians filled Ralph Engelstad back in 2005 for the World Junior Championship.

The game may be played outside of the country but it won't be outside of North Dakota's market and it will be a success. And it may be the first of many such NCAA games to be held in Canada.

Sources have indicated to me that programs like Cornell, RPI, Niagara and St. Lawrence are all potential candidates to follow suit because of their relatively close proximity to Canada. 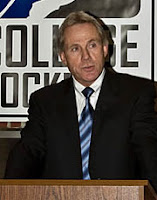 On Tuesday's edition of The Pipeline Show I interviewed Paul Kelly, the Executive Director of College Hockey Inc., about this very topic. According to Kelly, this is an idea that has been talked about for a while now and that UND head coach Dave Hakstol, (who hails from Warburg, Alberta - about an hour SW of Edmonton), is eager to put his program on display in prime recruiting territories like Manitoba and Alberta.

The NCAA has held its marquee event, The Frozen Four, in non-NCAA hockey markets; It's been in Anaheim, St. Louis and in 2012 it will be in Tampa Bay. I asked Paul Kelly if he could ever see the day when the Frozen Four could be played outside the United States and in Canada.

"I would say 'absolutely, yes'. Ultimately it's the NCAA that has that final call but I know that the City of Toronto and Maple Leafs Sports and Entertainment have expressed interest in the past and have continuing interest in perhaps making a bid."

I think it's important to note that Paul Kelly's role is in the promotion of the NCAA option for players and that he is not akin to David Branch, the Commissioner of the CHL. It's not up to him to make those types of decisions but it is very intriguing to think of the Frozen Four being played on Toronto.

That won't happen in the foreseeable future as the next four Frozen Four events are already mapped out.

The CHL has 9 American based teams and so Major Junior has had a presence in some of the Northern States for many years now. The WHL has recognized the potential of a market like California and has been holding summer camps and information sessions in the Golden State for the past number of years.

I've been told that the WHL has been considering taking a similar stance with Minnesota and being more proactive in introducing that strong college hockey market to the CHL option.

College Hockey Inc. did something similar in Ontario earlier this year and Paul Kelly announced on our show last night that a number of other Canadian stops are on the immediate agenda.

"Between April and September we expect to be 5 or 6 Canadian cities. We're hoping to come up and just provide the information to the players and their families of just what NCAA hockey is all about. Is it something that young players should look at and consider seriously? Do they have questions about it? How do they get noticed by a coach? If they decide to play college hockey, where should they play? What are scholarships all about? What should they do until they are old enough to qualify for college hockey? What are the eligibility issues?"

"We go out and make a presentation and we bring a number of coaches with us, we'll run an on-ice portion with some scrimmages and let the coaches sort of evaluate the players and then we do a Q&A with the coaches."

About 25 coaches attended the event in Toronto in the Fall and from that first information seminar, College Hockey Inc. decided that it was feasible to go across the country and hit the major recruiting grounds. Kelly mentioned a few potential stops including Vancouver, Calgary and Edmonton, Montréal and back to Toronto. You can bet that the regional Jr.A Leagues and the entire CJHL will be on board as well.

With information seminars, regular season games and potentially major events like the Frozen Four headed to Canada, the profile of NCAA hockey in Canada is bound to go up.

Surprisingly, media coverage in Canada is still largely not on board. We've been told by many sources from both sides of the border that The Pipeline Show is the only Canadian based program (radio or otherwise) that provides regular and unbiased reporting of College hockey. That still boggles my mind considering the number of Canadians in the NCAA system with families back home who would appreciate more coverage.

As proponents of both CHL and NCAA hockey, we're excited about the growth potential for the sport moving forward.
Posted by Guy Flaming @ 4:00 AM

Hi guys -- excellent job you do...on "And it may be the first of many such NCAA games to be held in Canada.", actually these games do happen from time to time. In Oct 2008, RPI and Vermont played a nonleague game (non-EX) in Quebec City. And in Jan 2006, St. Lawrence and Clarkson played at the (then) Corel Centre in Ottawa. Keep up the good work...

Mike, please send me an email:

Thanks for the info on those two games, I hadn't heard that they had occurred.

Guy, Awesome article and like the picture of the girl as well. I can see this Sioux and UNO game being a big hit in Winnipeg.

What girl? You meant the CN Tower.

Honestly, I never saw the CN Tower, I am still looking at the girl... Still an awesome article, I really appreciate what you guys do for college hockey... Definitely awesome coverage. Some day I think the NCAA should consider allowing a team(s) in Canada. I think Vancouver at the University of B.C. would be a nice choice for the WCHA.