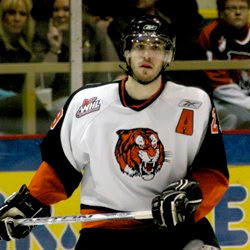 Alan Caldwell has done a terrific job of breaking down the overage situations for every WHL team and the choices they have to face coming into the 2008-09 season. (See his work here.)

There are a couple of things worth noting in regards to the Edmonton Oilers and the Oil Kings.

First, Caldwell speculates that new Oiler defenceman Jordan Bendfeld will return to the Medicine Hat Tigers next season although my Oiler sources have all been telling me otherwise. Since the draft the organization has been talking about the contribution to Springfield (AHL) they think Bendfeld can make, especially in the toughness department.

However, the roster in Springfield was bulging before the addition of Jake Taylor so maybe there isn't room for Bendfeld now. The argument then becomes 'what's better for Bendfeld - the ECHL or the WHL?'

The other thing to consider is contract negotiations. I haven't asked but perhaps talks are going no where which would put Bendfeld back in a Tigers uniform by default. Pure specualtion.

Now for the Oil Kings... and what a situation GM Bob Green is going to find himself in. From Caldwell's report:

Figren is gone pro. The other five should be back; I'm thinking I'd keep Cepek, Dowd, and Szaszkiewicz if I were them but on the other hand, the Oil King blueline is so horrible looking for next year that they might need to keep Lockerby too just to have another veteran guy.

I was not a fan of Cameron Cepek last year; I didn't travel with the team so I didn't see the road games but at Rexall, most nights I thought he was somewhere between average to awful. But, as Caldwell says, the Oil Kings defence is still rather lacking so they might need him back.

Brenden Dowd, while hot and cold, I thought was one of Edmonton's better players; I bring him back. Szaszkiewicz (or 'Jips' to coach Steve Pleau) is a local product and helped out on the ice during the spring prospect camp. I find it hard to imagine he won't be around as he's surely a favorite for the coach (both were in Spokane before the expansion to Edmonton). But he is a depth player.

It gets interesting with Jeff Lee though. Here's a guy they talked out of the NCAA to come and play for them. Edmonton needed a big forward and Lee wasn't playing much for his NCAA prgram in Alaska. However, if he loses his WHL job, he can't go back to the NCAA and for some reason I have a hard time seeing Bob Green doing that to a kid he recently wooed to his team.

Green is very conscious of how the Oil Kings are viewed by agents, players and parents. Last year the team had a verbal agreement with Robin Figren that they wouldn't trade him at the deadline and, despite a really nice offer from Regina, Green kept his word and let the Swede decide if he'd take the trade or not. Figren stayed and spoke publicly about the class and honor that Green and the WHL organization had shown him.

Yet they'll cut Jeff Lee? Maybe, he's certainly not the same sort of impact player that Figren was but it still doesn't seem right. Edmonton does have some incoming youth, especially up front, that could have an impact in helping Green make his decision. 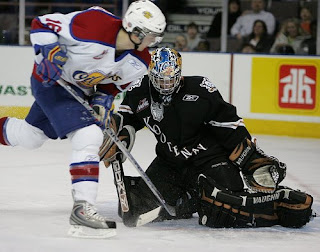 Caldwell also mentions that Kootenay might opt to dump goalie Kris Lazaruk and go with a youth movement. (Lazaruk is the goalie in the photo making the save on J.P. Szaszkiewicz).

Right now it looks like Edmonton will have Dalyn Flette and one of a couple youngsters vying for the back up spot. Flette didn't exactly light the world on fire last year and while the future for the Oil Kings looks fantastic (see Laurent Brossoit and Cam Lanigan) Green might have an interest in a guy like Lazaruk for one more year.

One more thing: Caldwell conveniently lists all the prospects for each WHL team on his site as well. You'll find the links at the top left on his site. Extremely handy for those of us who care about such things. 'Small Thoughts At large' is recommended reading and we've had it listed under Pipeline Pals for some time now.
Posted by Guy Flaming @ 10:37 AM

There is no way that Jeff Lee isn't back in Oil kIngs silks next year you can count on it. I also agree that JP will be back. I have also heard comments along the lines of Cepek being a valued part of their leadership core, possibly a captain next season. That leaves Dowd and Lockerby on the outside. I'd rather see Dowd back before Lee or Szaszkiewicz up front and Lockerby was helping defensively before his injury and I think provides more upside than Cepek next season.

What about the goalies Corey? Think they go Flette + Lanigan/listed guy or do they go out and grab an older guy like Lazaruk? Of course then they'd only be keeping 2 of the guys on the list above. Maybe you could send Cepek out in the trade for the goalie or something.