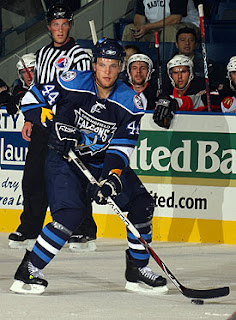 ...in the minors for this year. Wow what a revelation eh? But before you move onto to the next blog in the world, hear me out. It's my opinion that Rob Schremp's stint in the minors for a full season this year, could be the turning point in his career. I was recently told that only 6 weeks ago did he fully recover from the knee injury he suffered last year, and is playing as good as he's ever played right now.

The Schremp saga reminds me somewhat of what happened with Jason Spezza in Ottawa, and who knows, maybe Rob Schremp develops into a poor man's Spezza. Now the Senator middle man who went 2nd overall is a much better skater than Schremp, but when Ottawa drafted him he came with all kinds of offensive flare, but fizzled when it came to defence. Sound familiar???

Both were Ontario Hockey League stars, who were well above a point per game average. In fact Schremp outscored Spezza when comparing their Junior years by 31 points, although Spezza played 19 less games, but you get the point.

Where the comparison really come into view for me is that everyone wanted to rush Spezza to the NHL. Same for Schremp, in fact there were some in the Edmonton media scene who said Schremp had to make the team this year or he became a suspect rather than a prospect. With Spezza it was his lack of defensive game, ditto for Schremp. And think back to who was Ottawa's head coach then...Jacques Martin, a bench boss who constantly preached defence. Now who is the man behind the bench in Edmonton...see where I'm going here?

Now, in the AHL Spezza took off, with 171 points in 123 games, including blowing everyone away during the lock out with 117. He also learned how to be a more complete player and pro. Schremp is not there yet, but he's getting close, and he dealt with a serious knee injury. The New York native was just under a point per game last year and is over the mark this year. He's also dealing with switching positions from centre to wing, where he'll likely end up as an NHLer. Under head coach Kelly Buchberger he's learning the essence of hard work, his plus minus is near the level mark and his top 10 parking spot in league scoring landed him an All star nod this year for the AHL.

This season was not Schremps to make the NHL for a couple of reasons. He was dealing with a bad wheel, and a couple of rookies in Gagner and Cogliano were exceptional and surpassed him during training camp.

Next year, I don't think that will be the case. He won't be the next Jason Spezza, but by following Spezza's path, he could turn out pretty darn good, and the Oilers might look pretty good down the road for being patient with him.
Posted by Dean Millard @ 4:31 PM

The only way I see Schremp in Edmonton this year is if we are sellers at the deadline and next year starts early. By my count we have Cogs, Gagner, Storts, Brodziak,Grebeshkov, Gilbert as rookies this year playing significant minutes and even if somebody wants to make an argument that Grebs isn't technically a rook I think MacT would beg to differ. The kiddie room is full and that is not a slight on Rob because he has a skill set that can be extremely valuable to this team if other attributes can be brought up to NHL average and that screams 'attention needed' from the coaching staff. The staff is otherwise occupied this year.

Cogs and Gagner are the future "Horcoff and Weight." Although Cogs is lacking in size a little.

Is there room for both Nillson and Schremp on the same team? Nillson has some fine playmaking skills, but I'm doubtful that he can play top 6 tough comp on an ongoing basis.

I think the same is true of Schremp.

One or the other. Nillson has speed advantage. Schremp isn't small, but needs to get stronger.