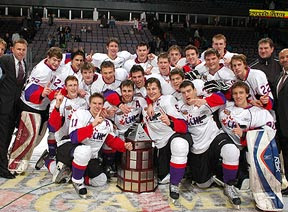 The CHL Top Prospects Game (TPG) has come and gone now and after getting to sit on the festivities for a week or so I thought it was about time to go over the performances of the participants. I'm really going to try and simplify it as much as possible; give a guy's name, club team, North American ranking according to Central Scouting and overall rank from ISS, then offer a brief synopsis of my thoughts on the player. The latter will be comprised of one on one interviews, the skills competition and of course the game itself.

Chet Pickard, Tri-City Americans (WHL): (1/4) Pickard played well, I would not say he was head and shoulders above the other four goalies here but he may have been the most consistent. I found it interesting that a guy from Winnipeg would decorate his mask with Captain America but when I asked him about it he told me it was a winning contest design drawn by a little kid. Of course, the team name goes well with the mask too. Grade B

Robert Mayer, Saint John Sea Dogs (QMJHL): (15/6) Quite the disparity between his CSS and ISS rankings. I know early on in the year he was one of the netminders being touted as one to watch this year but he hasn't played all that well. Was in net for Switzerland at the WJC but that team underachieved badly and suffered relegation for next year. Mayer stopped 9/9 in the breakaway relay during the skills but was lit up in the TPG game. Despite how engaging and friendly he was in interviews, I'd have to guess his stock dropped. Grade D

Peter Delmas, Lewiston Maineiacs (QMJHL): (2/5) Delmas was strong for Team White in the game but was only 6/9 in the breakaway relay the night before. What I do like about him is that he's got a ton of starts under his belt already what with Jonathon Bernier spending time in the NHL and the WJC this year and on the shelf with injuries last season. Delmas could be a dominant goalie in the Q starting next year. Grade B

Thomas McCollum, Guelph Storm (OHL): (3/3) It should be noted here that because ISS combines their Euro and North Americans together, McCollum is their top rated NA goalie behind two Euros. Easily made the highlight save of the game with a reach behind him goal line glove save. Even Grant Fuhr said it was an unbelievable stop. Very care free and friendly off the ice. Also went 9/9 in the breakaway relay. Grade +B

Tyler Cuma, Ottawa 67's (OHL): (15/34) Of the 6 players to take part in the fast lap event, Cuma placed 3rd with a decent time of 14.458 seconds. He got a second assist during the game and made a couple nice passes but this is a fairly quiet, don't-always-notice-him type of player. Nice enough guy in person, played along with me in an interview where he jokingly slagged former 67's (and current Oil Kings) play-by-play voice AJ Jakubec. 2nd rounder to me. Grade +C

Zach Bogosian, Peterborough Petes (OHL): (3/9) In the days and weeks leading up to the event, this was the player that I'd been hearing the most buzz about. "Watch his speed with the puck", "He's got a big shot" and "Size, speed and skill... complete package" were the types of comments I was getting. Before the skills competition, John Sexsmith had me appear on Global Sports and this was the guy I said to watch for. Bogosian was very good but was not the top blueliner of the event. He did blow a power play goal past Mayers and was generally solid throughout, wouldn't surprise me if he goes in the top 5. Grade +B

Michael Del Zotto, Shawa Generals (OHL): (14/22) Looking for a guy who raised his stock? Here's your guy. Del Zotto went Ray Bourque in the accuracy shooting going 4/4 then made a great move on the breakaway relay only to hit the post. No points in the actual game but played well defensively and did create at times. Probably closer to top half of the first round now than he was two weeks ago. Grade +B

Drew Doughty, Guleph Storm (OHL): (2/2) Clearly comfortable with the media now after appearing in several showcase events all year but his performance last week was pretty average bordering on disappointing. However, as Stu MacGregor (Oilers head amateur scout) told us last show, Doughty had the least to prove and NHL teams already know very well what he has to offer. But based only on his play last week... Grade D

Tyler Myers, Kelowna Rockets (WHL): (6/18) Standing a very Wookie-ish 6'6, Myers stood out for his height and his physical play. Once this guy fills in that frame (he's currently under 200 lbs) he could be a force to be reckoned with. Very strong play defensively and notched an assist as well. Not sure he's a top 10 guy but his play here may have helped his cause. Grade B

Jyri Niemi, Saskatoon Blades (WHL): (29/33) Surprised onlookers by winning the hardest shot competition with a NHL calibre 97mph blast. However, that was about it for positives on the week. Didn't have a great game (like most of Team Red) and his lack of English didn't help when it came to interviews. Grade C

Alex Pietrangelo, Niagar Ice Dogs (OHL): (5/4) A well balanced blueliner with size and offensive ability, Pietrangelo probably did not live up to the expectations some had of him. His fast lap was second worst (15.281 seconds) and only ranked that high because the "slowest" skater wiped out. No points in the game but did score on his breakaway relay attempt and played physical so it wasn't all bad. Grade +C

Colby Robak, Brandon Wheat Kings (WHL): (8/14) One of the under-the-radar players who helped his cause with a good showing in the game. His wonderful long bomb pass to Jamie Arniel was one of the best plays of the night. Fell during his fast lap but looked very good until that slip. Stock surely went up and a strong finish in Brandon might get him top 12 consideration. Grade B

Yann Sauve, Saint John Sea Dogs (QMJHL): (21/47) One of the players who was voted into the event by the NHL teams that wanted to take another look at him. Sauve played the role of the trigger man on the power play for Team White and picked up a helper on the games second goal. Most notable, he was the other player in the fight with Steven Stamkos. Grade -B

Luca Sbisa, Lethbridge Hurricanes (WHL): (18/28) The Swiss product has been solid for the Hurricanes this year, underperformed in the WJC and was pretty good in the TPG week. Sbisa finished second in the accuracy shooting event going 4/6 and he played OK in the game. I like him as a late first rounder, a very good 2nd rounder if he's still there. Grade -B

Luke Schenn, Kelowna Rockets (WHL): (7/7) Without question he was the best blueliner in the game and his draft stock just went through the roof. If Doughty isn't the top rated defenceman anymore it'll be because Schenn just leap-frogged him. A total package of size, defensive reliability, bang on outlet passes, physical play and leadership skills. Scored the opening goal but was dominant, especially in the first half of the game. His 94mph shot was 2nd best in the big shot event. Great performance. Grade A

Colten Teubert, Regina Pats (WHL): (27/21) There was more hype around Teubert early on this year but his stock has dropped for some reason. I've heard the knock on hm described as "All the tools, no tool box" and when I interviewed him in the preseason I could kinda see why. However, he was very well spoken last week and I personally thought he had a pretty good game. He was one of the more physical guys on the week. Grade B

Part 2 with a look at the forwards will come out in the next few days...
Posted by Guy Flaming @ 2:35 PM

Some interesting thoughts, Guy.
I would have to disagree on a couple of things you forwarded here.
For example, I thought Teubert went from a awful first period to an average second period, to a third period he spent running around trying to run over forwards out of frustration. Giving him a grade of B in the game is rather generous.
Robak has impressed more and more as the season has progressed, and I can see him being a solid NHL defneder in the future - and I felt he played a far more solid game than del Zotto or Teubert, and should've gotten a better grade on the night than either of the two.
You had a chance to talk with some of the Oiler scouting staff - who did they come away impressed by on the event?

They're pretty tight lipped about it actually. Some of the obvious ones that every other team will have come away liking like Boedker, Boychuk, Hodgson, etc...

I'm pretty sure they're not looking at goalies. The defensive prospects in the system is pretty solid right now so I'd guess they'd be looking for a bigger offensive winger right now.