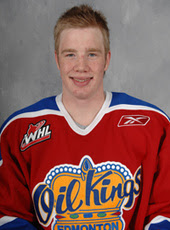 Not to turn this into the Official Robin Figren Blog or anything but with the WHL deadline just days away I wanted to get out there my short list of sensible destinations. To me, it's a list 4 teams long.

Here's why I think the 4 teams make sense:

1) They have room for a Euro - keep in mind that you can only have two on your roster so it's not like he can go to any team in the league.

2) They are a contending team - Or at least one that could make noise in the playoffs especially after adding an underrated talent like Figren.

3) They've got something the Oil Kings would covet be it picks or players.

The Hitmen are the team I've heard for the longest and most often as having interest. Calgary does have a bunch of 17 and 18-year-olds but, having just picked up Brock Nixon from Kamloops... will that be enough tinkering for Kelly Kisio and his club?

Kelowna started the year slow but now they're 4th in the Western Conference and not all that far back of the leaders (although they have played more games). The Rockets only have Oiler draft pick Milan Kytnar as a Euro so they have the room to take on Figren. It's a pretty young blueline in Kelowna, only two '88 born players so perhaps a package deal including Edmonton captain Bretton Stamler could work here. That would mean that Edmonton would have to take back a '87 though as the Rockets have their quota already. Still, James McEwan provides little more than toughness for his hometown squad, (something Edmonton could use) so maybe that would still work... toss in a young blueliner and a pick to Edmonton and perhaps.

Something similar with Tri-City really who also has a young blueline outside of L.A. Kings property T.J. Fast. However, all 3 20-year-olds with the Americans are key components of their team so I doubt they'd move one to get Stammler. Figren though, would definitely fit a team that needs to get past Spokane and Vancouver. The Americans are a very young team; looking at their forwards on their roster and you see 7 players born in '90 or '91.

Lastly, the Regina Pats have already been very busy and so I'm not sure how much more tinkering they'd look at doing but they do have the room to add a Euro and they'll be fighting to getpast the likes of Calgary, Lethbridge and Brandon.

Folks I've talked to seem to think that, especially with his performance at the WJC, Robin Figren might be the hottest commodity available in the WHL right now. Throw Ty Wishart into the mix and one of those two should bring in the best return. The Oil Kings are looking long term and as much as Figren has enjoyed his time in Edmonton... I think his days are numbered. Like 4... or 3... 2...
Posted by Guy Flaming @ 3:19 AM

Notice that Kamloops just cleared out their 20 year old spots? Maybe they could use a 'steady' 20 year old defenseman as they try to get into the playoffs in the west?

Doesn't Figren have some sort of no trade clause though, that he gets to decide where he goes, and I hear he wasn't all that thrilled with Calgary when he was there???

In conversations I've had with GM Bob Green he's never mentioned anything about a NTC for Figren so I would say that's not accurate.

The second part, about not liking CGY... I know he's said openly that he's enjoyed Edmonton a LOT more but that might also have something to do with be the #1 guy here compared to a depth guy last year down there.

Wow... so apparently Figren is not going anywhere. AJ Jakubec mentioned on Total Sports that Figren would indeed be an Oil King for the rest of the year.

Frankly I am stunned. I'm not sure how this fits the team's "long term vision" nor how it benefits Figren's long term development to play on a non-playoff team as opposed to a club that could conceivably make the playoffs, win the league title and go to the Memorial Cup.

The above comment from anonymous might be onto something about a NTC, time to do some digging.