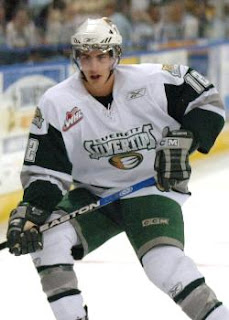 Every draft year there is a player who wears the "Problem Child" label and like Steve Downie or Akim Aliu before him, 2008's Kyle Beach has his supporters and his detractors with very few people straddling the fence.

There is no question about his hockey sense, his skill set, his physical talents or his desire but there are questions abound in regards to his character and his quality as a human being.

Beach was a guest on The Pipeline Show when we ran a produced feature after speaking with both him and Everett head coach John Becanic. (archived audio). In that clip you'll hear the details of the butting of heads he had in the summer with Team Canada U17 coach Dave Barr so I won't go into that again.

Since then there have been, and I stress, uncomfirmed reports of off ice issues including a possible motor vehicle/alcohol incident. In speaking with some people around the WHL this season about Beach, I've been told from one General Manager that he instructed his scouts to "not even bother looking at him" during his Bantam draft year because his reputation had been sullied even back then. Another source alledges that in a game against the Vancouver Giants, Beach verbally harrassed Milan Lucic about everything from his posture to his speech impediment.

Now again, these are unsubstantiated stories I'm talking about here and my plan was to talk to Beach this week at the Top Prospects Game here in Edmonton to get his side of all of this. However, thanks to a brutal sucker punch last week, Beach is unable to attend the showcase event. Like the ADT Canada-Russia challenge snubbing and the missing invite to Canada's WJ tryout camp, this is another blow for Beach who will now miss all of the premier events during his NHL draft year.

For those of you that haven't heard about the punch, haven't seen it or don't even know what I'm talking about... here's the video.

Beach grabs little Mitch Wahl which he didn't need to do, face washes him, gets seperated, lightly pokes at Bruton and then from out of nowhere takes a right hook to the chin and drops like a sack of hammers. Reaction to that punch has split the hockey world in half.

Kepp in mind that the Chiefs and the Silvertips are arch rivals and post game dustups are in their history already, take this brawl from the playoffs last year.

Now Beach is an aggravating player to go against and I'm sure tempers were high in the game on both teams but saying that Beach deserved that KO for what he did to Wahl or Bruton in that instance is completely ridiculous. The end result is a concussion for Beach who will be forced to sit out of the Top Prospects Game... and for a facewash???

Last week we had EJ McGuire from Central Scouting on the show who said Kyle Beach "has NHL skills exuding out of him..." and went on to say "If the maturity light comes on with Kyle he's going to be far and above anything on our list."

But now scouts and media and fans alike will be robbed of seeing Beach in a game with the rest of his draft class where he can be guaged and graded against his peers.

All for a facewash? You might think Beach is a jerk or a problem child but you should not be happy to see a player get injured, let alone lose an opportunity like the Top Prospects Game. An especially not for his part of the mess at the end of the game last week.
Posted by Guy Flaming @ 1:58 PM

In hockey, the truth is - you are accountable for your actions, and you better anticipate such.
Grabbing a player needlessly after a goal, shoving someone in the face, and towing your history with you into a scrum...and thinking that someone ISN'T going to pop you in the beak at some point??
I like Beach, and agree fully will EJ's assessment that he could be a top 5 guy in the draft if he stuck to imposing himself on the opposition, using the body, and trying to generate offence from that earned space.
Perhaps, as the old saying goes, he finally got some sense slapped into him.