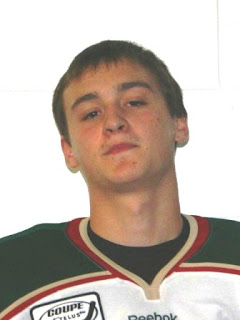 The Edmonton Oil Kings were only too happy to finally get 2008 1st round pick Michael St. Croix into his first Major Junior contest and the new kid responded in a style by potting his first career WHL goal.

T.J. Foster and Shayne Neigum picked up the assists on the goal which came at the 6:15 mark of the 3rd period giving the Oil Kings a 3-1 lead. That goal proved to be the backbreaker for Moose Jaw who had spotted the visitors a 2-0 led in the opening frame.

Even though he's missed a whack of action from his club team, St. Croix still leads the Manitoba AAA Midget Hockey League by a wide margin; he has 76 points in 29 games (no... that's not a misprint).

St. Croix will play again tomorrow as the bus heads East to Brandon, Manitoba - a fine prairie city aside from being the birthplace of one Dean Millard.

The 15-year-old St. Croix recently played in the World U17 Hockey Challenge in Port Alberni B.C. where he was the youngest player on his team (the only '93 birthdate). He collected 7 points in 6 games and was a key figure on Team West and their 4th place finish. 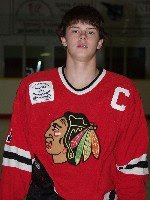 Another member of Team West was Dylan Wruck, another Oil King prospect. Wruck had 4 points in the tournament but leads the Saskatchewan AAA Midget League with 57 points in 26 games. Wruck's club, Beardy's Blackhawks from Duck Lake, SK are third in league standings.

Both St. Croix and Wruck are expected to be rookies with the Oil Kings next year.
Posted by Guy Flaming @ 8:58 PM