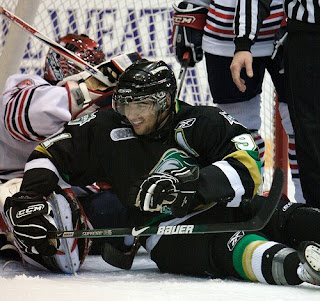 Nazem Kadri earns his third draft performer of the week award after posting a goal and 6 assists in 3 games for the Knights who currently sit first in their division and second in the OHL’s Western Conference. Kadri is amongst the top scorers in the OHL with 16 goals and 47 points in 30 games. Kadri is a London native and known for his creative playmaking and is currently ranked among the top ten draft prospects by ISS. 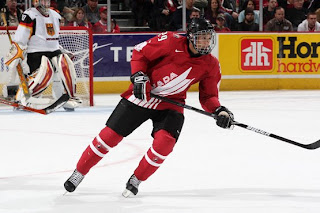 Evander Kane returned from the World Junior Hockey Championship with a bang recording 4 goals and adding 2 assists in 2 games and earning another draft performer of the week award. Kane, who is currently ranked 7th by ISS amongst NHL draft prospects has 26 goals, 54 points and a plus- 31 rating in 30 games for Vancouver. Kane is a player with great speed and who works hard despite his small stature.

Steven Anthony earns his first nomination as draft performer of the week after posting 3 goals and 5 assists in 2 games including a 6 point night in an 8-1 win over Gatineau. Anthony, a native of Halifax, NS and Saint John’s 1st Round pick in 2007 has 23 points in 37 games this season and is known for his smooth skating ability.

David Gerths earns his first draft performer of the week nomination after posting 2 goals and 2 assists in two wins for the first place Stars. Gerths has 8 goals and 23 points in 26 games for Lincoln this season and was a member of Team USA at the World Jr A Challenge held in Camrose, AB this past November.
Posted by Guy Flaming @ 9:37 AM