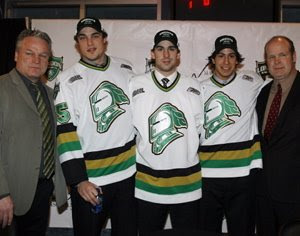 There is lots of movement on the list of skaters in North America but there is no surprise at the top where John Tavares is ranked #1. Seen here as he joined the London Knights last week, Tavares had a terrific WJC that answered a lot of questions scouts had.

Matt Duchene is now #2 on the list which is a bit of a eyebrow-raiser for me. Despite not playing in the WJC he moves ahead of Jared Cowan (falls to #7) and is still above Evander Kane (#3) who has more points and did play for Canada in the WJC. Jordan Schroeder comes in at #4.

The top ranked defenceman in North America isn't Cowan or Ryan Ellis or even Russian Dmitri Kulikov... it's someone named Simon Despres! Despres plays for the Saint John Sea Dogs in the QMJHL and I know zippo about him but will get educated tomorrow night on The Pipeline Show as we are slated to welcome beat writer Nathan White to the program. The Brandon Wheat Kings are well represented at the top of the list with Brayden Schenn #5 and Scott Glennie #12. Glennie (pictured) is someone I think would be of interest to the Edmonton Oilers who I expect to be on the hunt for a scoring forward with above average size.

The top rated forward available in the USHL is Louis Leblanc, a Quebec-born product who plays for the Omaha Lancers this year and is committed to Harvard in the NCAA. He'll also join us tomorrow night on The Pipeline Show after recetnly being named a 2009 Draft Prospect Performer of the Week.

Some other local notables: Edmonton Oil Kings forward Tomas Vincour obviously didn't have a WJC that impressed the scouts as he's tumbled from 1st round consideration all the way down to #79 on the list... Edmonton products rate well with Dylan Olsen of the Camrose Kodiaks coming in at #23 and Levko Koper from Spokane at #44... The top ranked Oil Kings property is actually Philip Samuelsson of the Chicago Steel. The big blueliner is ranked #59 but has yet to officially committ to a NCAA program so a future with the Oil Kings (who drafted him back in 2007) is still possible...
Posted by Guy Flaming @ 3:40 PM