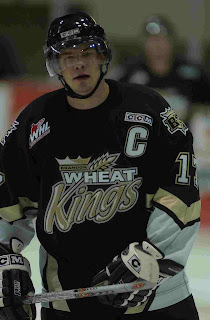 The Edmonton Oilers and the Pittsburgh Penguins announced a deal on Saturday morning that sees veteran NHL netminder Mathieu Garon head East in exchange for minor league goalie Dany Sabourin, farmhand Ryan Stone as well as a 4th round pick.

Half of The Pipeline Show loved this deal as soon as it was announced for obvious reasons. Millard's man-crush on all things Wheat Kings has undoubtedly got my co-host giving a wobbly thumbs up this afternoon (house warming party last night).

I'm fairly underwhelmed by the deal. At least the Oilers finally took care of the 3-headed monster in net... but they did so by adding yet another netminder to the already full-to-capacity farm team. Would the big club decide to keep Sabourin in the NHL, he's been in Pittsburgh all year despite his losing record and sub-.900 save percentage?

I'm assuming that Sabourin heads to Springfield which would give the Falcons a pair of capable goalies. That would be unfortunate for Devan Dubnyk and his development who's stats are an improvement (slightly) over last year. But the team is mired in a pretty serious funk right now that prompted President Bruce Landon to post a State-of-the-Union letter to the fans on the team website.

Ryan Stone, the former Brandon Wheat Kings captain who notched 99 points in his final WHL campaign playing alongside 50-goal sniper Eric Fehr, will add to the toughness and depth departments of the Oiler franchise. He was taken 32nd overall in 2003 but in all the conversations I've had with Oiler scouts over the years about that particular draft, Stone's name has never come up. Does that mean they didn't like him back then? Not necessarily but I think it's fair to say he wasn't a major target for the club. (They would have seen him plenty though as Fehr was a definite player of interest for Edmonton).

Stone had a terrific AHL season in 2006-07, the same year that the Oilers and Penguins shared the Wilkes-Barre roster. The forward had 33 points in 41 AHL games that season and, if memory serves, was back and forth between the NHL a few times although he didn't dress for the big club that season.

He's got decent size at 6'2 and 200 lbs and by all reports, he isn't afraid to get his knuckles bruised if need be. This season Stone had 28 points in 38 games for Wilkes-Barre so he'll add some offence to a Falcons squad that is badly in need of just such an injection.

Here's a clip of a recent fight Stone got into but I have to say, after watching the few of his bouts that I could find, I'm not sure if Oiler fans should be expecting much more than a Mathieu Roy-level scrapper here.

The Oilers also pick up a 4th round pick for the 2011 draft which, as always, is simply another lottery ticket for the draw. By the time the 4th round rolls around it will be the area scouts who have an opportunity to shine. 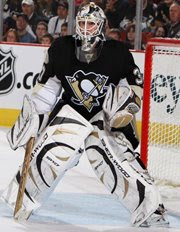 For me, taking a goalie back in this trade is sensless unless it was the only way that Pittsburgh was willing to follow through. From the Penguins perspective, they're adding Garon and would have to push Sabourin through waivers to get him to the farm where they have two decent youngsters they're trying to groom in former Denver Pioneer standout Adam Berkoel and Boston University alum John Curry. So why would they want to clog up their development system? It doesn't make any sense to do that right??

So they lump Sabourin into the deal and make him Edmonton's problem. Good for Pittsburgh, bad for the Oilers. GM Steve Tambellini knows sabouring from their days in Vancouver where the Canucks brought in the keeper for a stretch of games before losing him back to the Penguins on waivers.

Considering the L.A. Kings only managed to get a 7th round pick for Jason Labarbera, admittedly not as experienced as Garon, I guess a 4th + farmhand + tweener goalie is decent enough return for Edmonton in this deal. I don't think it makes them any better though and it really hasn't addressed a need so it seems like a fairly... unspectacular swap.

Hopefully it's the first of a few moves the Oilers make in short order.

So the official grade from TPS has Millard giddy and giggling like a school girl to see a former Wheatie involved while Flaming decidedly gives this one an un-enthusiastic thumbs up, but just marginally.
Posted by Guy Flaming @ 1:31 PM

Thanks for catching that, fixed.