The first big domino has toppled when it comes to trades in the WHL, as the Lethbridge Hurricanes picked up power forward Kyle Beach from Everett. The Canes also grabbed 19 year old D-man Mark Alexander in the deal, but gave up a first round pick in next year's bantam draft, as well as former 6th overall selection Alex Theriau whom Lethbridge drafted in 2007. The Silvertips also get 18 year old Dan Iwanski. 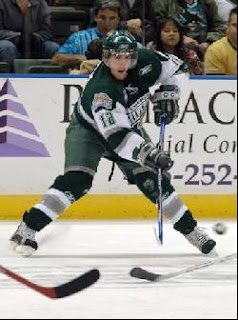 This is an interesting trade from a couple of perspectives. As of Tuesday, Everett was in 5th place in the western conference, but obviously they don't think they have the horses to contend with Vancouver, Spokane or Tri City come playoff time. They also don't think Kyle Beach will be back in the WHL next year, or they didn't want the 2008 Chicago Blackhawk 1st rounder back.

Another theory that was brought up on The Pipeline Show Tuesday night was that Beach wanted out of Everett. That was brought to us by PGTV sports director Allan Bristowe. From a Lethbridge angle they get a dominant combination of size and skill, but Kyle Beach does come with baggage. TPS is a fan of his on ice product, but we have spoken to people across the league who say he's a 'buyer beware' type of player.

He taped OHL over the Canadian logo at a Hockey Canada camp a few years ago, in a loud protest over Ontario Hockey League players getting more ice time. He also allegedly ridiculed Milan Lucic, shrugging his shoulders in a hunch backed manor, despite the fact that Lucic has a medical condition which cause his upper back to curve up.

If Beach hits Lethbridge and fits in, the currently tied for 8th place Canes could find themselves movin' on up like George Jefferson. If not it could wreck the room and their playoff chances. Hopefully the 18 year old works out in Lethbridge and it's the start to repairing his damaged reputation. It would also help the Canes if Beach returns next year.

The Kelowna Rockets appear to be a whole lot better without making a move yet. With Michael Backlund set to join the Rockets it give them even more offence to the 4th place club, that has scored the 4th most goals in the west. Backlund was terrific for Sweden in the WJC leading all Sweden forwards in scoring. He was especially good against Slovakia. Backlund was the player that got things going for the Swedes and allowed them to avoid the same fate as the U.S.A one game earlier. 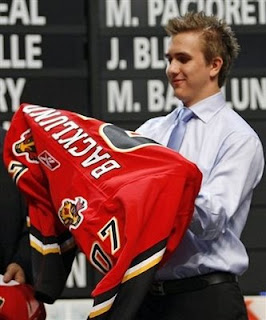 The Flames want their 2007 1st round pick in North America and with his playing time being cut drastically in Sweden it seemed a perfect fit, especially if the Rockets go on a lengthy run. I did read some disgruntled Kelowna fans who were upset their team didn't get in on the Kyle Beach bidding, but they could be getting someone soon in a trade. According to Allan Bristowe on TPS Tuesday, Kelowna is eyeing up St. Albert product Jesse Dudas. The 6'1", 226 pound blueliner is currently with Swift Current, but according to Bristowe didn't report to Speedy Creek and has been told he'll be traded. It will be the Columbus Blue Jacket's 4th WHL team if the deal happens.

Other names being bandied about right now, Defenceman Nick Ross out of Kamloops, a Phoenix Coyotes 1st rounder from 2007. I would be shocked if Joel Broda isn't dealt by Moose Jaw. The Capitals 5th round pick from 2008 has 35 goals in 38 games (as of Tuesday) and in my opinion would look great with Saskatoon. The Blades could use some scoring to compliment their great goaltending and solid blueline. It's been a long time since the Blades made a push at the deadline and this might be the year to do it. 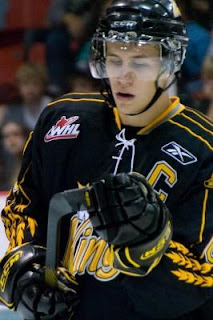 I'm also wondering out loud if Kelly McCrimmon tries to get something for 19 year giant blueliner Keith Aulie. He's 6'6", 222 pounds and proved he could keep up with fleet footed stars at the WJC. He would solidify a few team's back end. Does Aulie return for a 20 year old season in Brandon next year? I doubt it. I think the Flames will have him in the AHL with Quad City. While the Wheat Kings are 3rd in the eastern conference right now thanks to a 8-0-1 run lately, you know they'll want to load up for next year when they host the Memorial Cup. And in Regina Brent Parker has to ask himself the same question when it comes to studs Jordan Eberle (Oilers 22nd overall 2008) and Colten Tuebert (Kings 13th overall 2008) will they be back next year, or does he get a ton of young prospects and draft picks in return for them this year?

The WHL's trade deadline is January 10th, and it should be an interesting one, stay tune and feel free to give us your thoughts on upcoming trades or ones that have already happened.
Posted by Dean Millard @ 12:46 AM