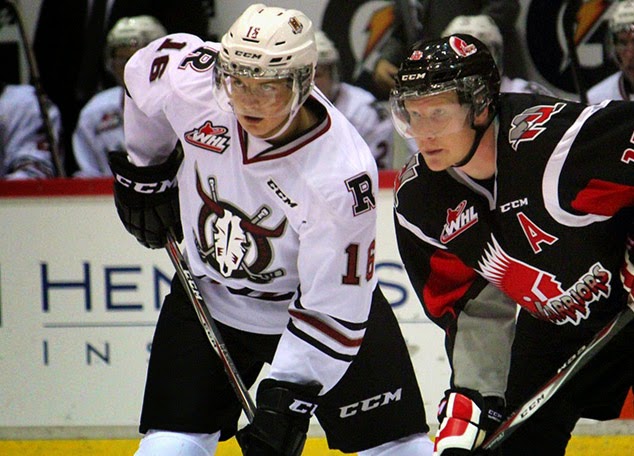 The second chapter in the Draft Blog written by Red Deer Rebels forward Grayson Pawlenchuk arrived this weekend. If you missed the first part of his series, you can find that HERE.

The Rebels have been one of the most heavily scouted clubs in the WHL this season with multiple players on the radar for 2015. The team has made moves this season with next year in mind, the year they host the Memorial Cup. Yet the club didn't take away from the current success they are enjoying and remain well positioned for a competitive playoff drive.

After the jump, the second entry to his draft blog written by forward Grayson Pawlenchuk.

Hey there, its Grayson Pawlenchuk from the Red Deer Rebels. I'm going to update you on how my season is going from about November and the changes that have happened. This is my second blog with The Pipeline Show.

I’ll start with telling you the changes that our team has made with the roster.

We have traded away quite a few guys but have got some key players in return. To our team we have added Riley Sheen, Nelson Nogier, Austin Adamson, Colton Bobyk, and Connor Gay. By adding those players we have added a lot of skill and size to our team and also some great guys and good leadership. Connor Gay and Riley Sheen are our top two scores right now.

We have had a pretty good year spending most of the time sitting second in our division but lately in third. In November, December, and first half of January we were doing really well getting an honorable mention in the CHL top 10 rankings but the second half of January and February we have let off a bit and lost guys due to injury and aren't doing as well.

The last week we have been playing well though and starting to get the outcome that we want but we still need to keep building on that so that we have a strong finish going into playoffs. It looks like we will be playing Medicine Hat or Calgary in the first round and i think that if we are to play our style of game and not get into the skilled game too much like they play, that we will be able to beat them. We're really hoping for a strong finish though going into playoffs soon so we need to keep getting better.

Personally with my season it has been up and down, some games I'll play well but then other games I wont which is the biggest thing that I'm working on right now in my game. I haven't got the points that i was expecting or that is expected of me but i still feel that my game outside of that has been pretty good. I take a lot of pride in my defensive play and my penalty killing which i feel i have been doing a good job at. I just try to not focus on the points and the worry about the other parts of my game; if i keep working hard and doing things right they will come. I'm expecting a lot more from myself these last couple games and for in playoffs.

I look forward to the rest of the season and playing out these last couple weeks we have. It's weird to think the regular season is almost over already but that being said, I'm really excited for playoffs to start and to see how our team does. I believe that we have a great chance in going far, we have a great group of guys and we just need to play our game.

That's it for me for this one, i look forward to updating you again on how the year finished and how playoffs went. Thanks again to The Pipeline Show for offering to let me write these blogs. If you have any questions you can contact me on twitter (@pawly97). Thank you for reading.

Do you have any thoughts regarding Keith Kinkaid.?

I think Oilers should look at him as a possible trade in the summer.