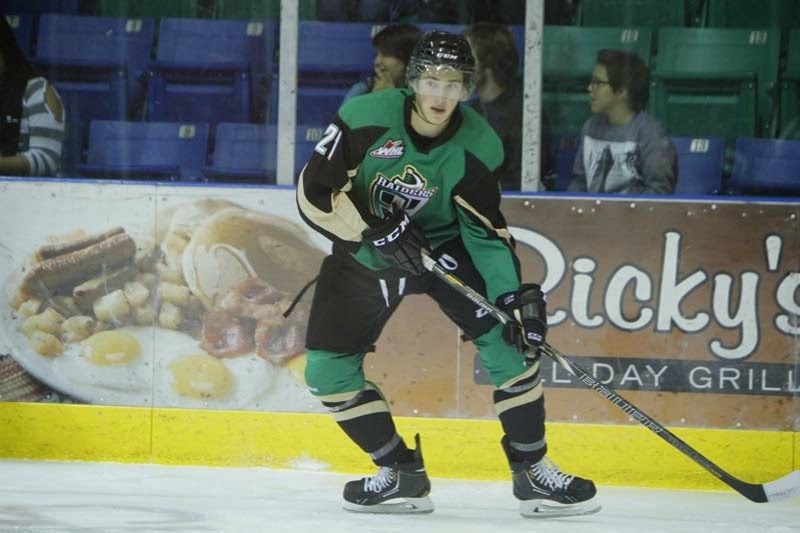 The second blog entry from Prince Albert Raiders forward Matteo Gennaro arrive in my inbox this week. If you missed the first chapter, it can be found HERE.

The St. Albert product has eclipsed his stats in all categories from a year ago and is currently focused on helping the Raiders in their quest to chase down a playoff spot.

After the jump, the 2nd entry from Matteo Gennaro...

It has been a few months since my last write up, and there have been definite changes out here in Prince Albert. From the beginning, this season has had its share of fluctuations with wins and losses leaving P.A. currently hovering just outside of a playoff spot.

Many changes on our roster and within our coaching staff forced adjustments to be made on our team. Within the business of the WHL, the Raiders enacted some key trades, and a number of them with the Kelowna Rockets. Losing Leon Draisaitl, Josh Morrissey, and Gage Quinney, was significant, but with attaining Kris Schmidli, Dalton Yorke, Austin Glover, and Jeese Lees, we gained a new energy. Some natural changes occurred with team lines and player roles, as well as a different dynamic in the dressing room with new personalities being brought in. There are so many great guys on the team.

Although trades and injuries have a direct effect on any hockey team, the biggest change that has influenced the Raiders this season, has been the hiring of our new head coach, Marc Habscheid. Marc comes into P.A with high accolades. Beginning coaching in Saskatchewan in the SJHL, then in the WHL with some high profile teams, Kamloops, and Kelowna, going so far as to win a Memorial Cup, Ed Chenoweth Cup, as well as head coach the 2004 World Juniors.

Even though Coach Habscheid has great credentials and coaching experience, the best thing is he is an inspirational coach, helping us get back to feeling and belonging to the “Raider Culture.” Even when coming up with a loss, Coach Habscheid talks about focusing on a “winning culture,” and moving forward. He has us constantly look into ourselves both as players and as people, to realize what we can bring to the team. By also addressing technical game details, he helps us improve personally and then to connect as a team.

So, it makes sense that Marc really believes we should be doing things together as Raiders and for the community. Some fun team bonding events were going tubing at Big White on our B.C. road trip, an outdoor practice at a local P.A. fan’s rink, a floor hockey game with a team from Special Olympics, a team Super Bowl party , and a rowdy bonspiel of curling in P.A. Of course there are many community events like school “read ins,” and visits to seniors homes, but the most classic was our open ice practice on Montreal Lake.

After practicing on the rough lake ice, our team was invited to go ice fishing, being hosted by local hunter/fishermen. This is where you saw a clear division between guys growing up in rural areas, and guys from the city. Using borrowed gear, we all listened and learned as we awkwardly stood around our respective ice holes. Amazingly, freezing cold in my Raider’s hoodie, track jacket, and Vans, I got lucky and ended up catching a 10 pound Pike. We stood and watched as the fish was filleted in seconds, breaded and pan fried off the heat of a propane flame. It was awesome.

Back to our present status as a team, Prince Albert needs some consistent wins to jockey into a playoff position. For myself, my current play has grown favorably. With the changes to our roster and different plays and systems, I have been given new playing opportunities. I have a more dominant role, get some special team time, and I am relied upon more readily. I really appreciate this change.

As a team, we are looking forward to the upcoming Alberta road trip, with some key match ups with the Oil Kings and Rebels, which have playoff implications. The pressure to do well is great.  Our guys are getting fuelled up mentally and physically to challenge and finish strong, hoping to secure a playoff spot.

That’s where things stand for now. Thanks again to Guy Flaming and The Pipeline Show for the chance to write my update. Feel free to contact me on Twitter (@gens_21) and thanks for following up with me.
Matteo Gennaro
Matteo Gennaro is listed by NHL Central Scouting as a 6'2.25, 187 lb forward. He was given a 'C' rating in their pre-season listing of players to watch for the 2015 NHL Draft. Gennaro managed 5 goals and 15 points as a rookie but has surpassed those numbers in each category with 11 goals, 11 assists and 22 points.
Posted by Guy Flaming @ 12:35 PM