As has been reported by USCHO.com, 9 current and future members of the Notre Dame Fighting Irish hockey team were arrested over the weekend at a house party which involved under-aged players.

All of the players have been identified.

Senior Joe Lavin (CHI 2007) appears to have been fingered as the guy supplying the under-aged players with the booze.

The legal drinking limit in the United States is 21. That's a big difference from the 19-year-old limit (or 18 here in Alberta). I can see how this would be an adjustment for the Canadian born players playing NCAA hockey. 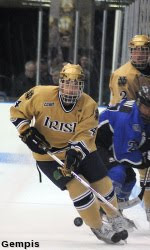 This incident follows closely on the heels of Riley Sheahan (left) and Kyle Palmieri's own headline making event from a couple of months ago.

Hey Jarred Tinordi... how's that decision between Notre Dame and the London Knights coming along?

I'm sure this is not the kind of publicity any program would like out there but it's got to be a big kick in the junk for the Irish to have it happen twice in a two-month span. And even bigger this time.

UPDATE: More details have come out on Monday morning and it doesn't get any better for the prestigious school. Here is the story from the South Bend Tribune.
Posted by Guy Flaming @ 1:12 AM