A couple of weeks ago the AHL held an outdoor game which featured the Syracuse Crunch and the Binghamton Senators. This past Tuesday evening on The Pipeline Show we had the opportunity to speak with AHL President Dave Andrews about that event as well as some other timely subjects. We touched on this year's version of the outdoor game and our conversation grew from there.

You'll recall that last year it was reported right here at Coming Down the Pipe that there was another proposal for an outdoor game which would have captured the imagination of hockey fans everywhere. Something so incredible that "it couldn't possibly be legitimate". An idea "too good to be true" "bordering somewhere between fantasy and ludicrous".

Last August I received a tip from a reliable source that the Norfolk Admirals were planning an outdoor hockey game on the deck of an aircraft carrier. You can read my original entry here.

The reaction we received to that report was very interesting and ranged from excited anticipation to outright dismissal as a hoax. Here's what Gregg Drinnan of Taking Note had to say about our post.

If you scoot on over to Coming Down the Pipe — there’s a link over there on the left — you’ll find a piece by Dean Millard speculating about the AHL’s Norfolk Admirals and their desire to play an outdoor game on the deck of the aircraft carrier USS Eisenhower. . . . That brings back memories of one of the greatest of all April Fool’s stunts. I can’t remember exactly when it was, but it was a number of years ago, when the Sabres issued a press release stating that they would be holding their next training camp on an aircraft carrier. It was hilarious. . . . As for the Norfolk rumours, Keith Phillips of the Admirals said: “We have seen that article. I'm not sure where a blogger in Edmonton is getting such information. We do not have any plans to play a game on an aircraft carrier this season.” 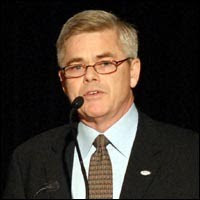 Getting back to last Tuesday night, we asked AHL President David Andrews to comment on the aircraft carrier idea and low and behold, it turns out that we lowly "bloggers from Edmonton" weren't out to lunch after all. Not only was much of our information correct and there was serious talk about this happening but there is still a very good chance that it will happen.

"It certainly was a legitimate, and may still be a legitimate project, that the Norfolk Admirals are looking at. That concept had gone all the way up to senior navy leadership in Washington and they had the approval as necessary to do it and I'm not sure what slowed it up but I would not be surprised to see that happen. There was a whole lot of interest in doing it and the potential for National television coverage in the United States."

Andrews went on to comment more on the possibility that our "April Fool's Joke" actually has an anchor in reality.

"It's amazing how large those aircraft carriers are; they were going to be able to put an arena in there with about 6000 seats on the carrier in Norfolk. It would have been pretty interesting."

As the topic continued to be discussed we asked whether the game would be played while the vessel is anchored in harbor or would they consider trying to play the game out at sea? I'll let you listen to what President Andrews had to say about that but before we changed the subject he did add this final comment:

"I think it's a neat idea and there has been a lot of thought put into it and a lot of work done on the project so... I'm not so sure that it's dead yet."

To hear that entire conversation we had with President Andrews, click here to access our media archives and then click on "AHL Feature". We also talk about the relocation of the Carolina Hurricanes and Edmonton Oilers AHL affiliates, the future of the Springfield Falcons as a result and why he believes there will be 30 teams in the league next year. It's well worth the listen and we promise that that's the truth and not a hoax.
Posted by Dean Millard @ 10:57 AM