-
It's been 30 years since the first high school hockey player was taken in the NHL draft as Jay North of Bloomington-Jefferson was taken by the Buffalo Sabres in the 3rd round. One year later Bobby Carpenter of St. John's prep school became the first high schooler taken in the first round when Washington called his name 3rd overall. In 1983 high school hockey was front and centre when Minnesota took Mount St. Charles left winger Brian Lawton was selected 1st overall. 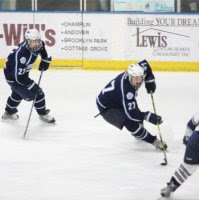 Nick Bjugstad won't equal Lawton's accomplishment but he should be able to follow in the skate strides of fellow Minnesotan Nick Leddy whom the Wild took 16th overall last year. Bjugstad is the top rated high school player according to NHL central scouting and it's not hard to see why.

He's 6.05, 190 pounds and notched 35 goals in 28 games this year for Blaine High School in Coon Rapids, Minnesota. Bjugstad was the Associated Press player of the year, the Metro player of the year, and is in contention for the Mr. Hockey award - the most prestigious for any high school player - this weekend. The most common words used to describe him from coaches and scouts I've talked to, are humble, character and skill. Not a bad overall package.

The Blaine bomber likes to pattern his game after San Jose's Joe Thornton.

"He makes plays like nobody else and he's a big boy and he can skate so Joe Thornton is definitely a guy I look up to."

Bjugstad's Blaine Bengals were upset in the quarterfinals of the Minnesota State Hockey Championship on Thursday and it means a very disappointing end to his high school hockey career, even though he's in grade 11. The power forward accelerated his studies to graduate early and plans on attending the University of Minnesota next year.

"I grew up watching the Gophers, it's been a dream of mine to play for them."

I'm hoping he gets chosen to play for the States at the Under 18 World Championship so we can see the big man in action. NHL central scouting has him ranked 12th among North American skaters in their mid term report. He's also the 3rd highest American born player behind Cam Fowler and Derek Forbort.

Guy touched on the future of the current Gophers coaching staff with Bjugstad who seems destined to be a Gopher. Those answers and more here.
Posted by Dean Millard @ 6:00 AM