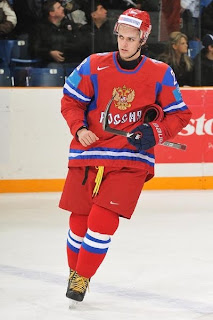 After Russia lost it's second straight game Monday night at the World Junior Championship, giving them a disappointing 6th place finish, their star player dropped a few bombs when speaking about his future in the NHL.

Nikita Filatov, who should have been one of the top 3 scorers in the tournament, finished outside of the top 29 scorers with 6 points in 6 games and it sounded like he might be finished with the Columbus Blue Jackets.

General Manager Scott Howson selected Filatov (photo: Matt Manor HHOF-IIHF Images) 6th overall in 2008 and the dynamic forward has been pegged as the organization's top prospect ever since. That might all be coming to an end though. 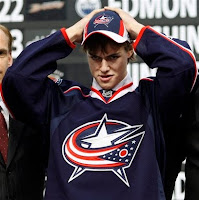 Filatov wouldn't say what the reasons were that led him to return to Russia and play in the KHL, but most believe he is not happy with head coach Ken Hitchcock. Filatov went to Columbus management disgruntled over his playing time and asked if he could return to his home country.

"Probably they were happy not playing me and also they agreed with me when they heard I was going back."

Filatov missed his family, but more than that he missed being a go-to guy.

"When you're playing and you're in the season in the team situation you feel like you in the game you don't worry about things so much." 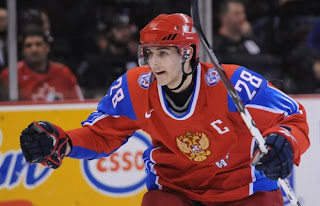 If Hitchcock is indeed the reason why Filatov isn't happy, the Blue Jackets head coach might not be the only bench boss he's having problems with. When asked if Filatov and the Russians quit on Vladamir Plyuschev, he had this response.

Plyuschev sure didn't endear himself to Filatov too much when he unceremoniously stripped the marquee Russian of the captaincy before their 5th place game.

An NHL executive told me that Plyuschev was to hard lined with his players, who tuned him out. The Pipeline Show saw evidence of this during the 2008 World Junior A Challenge in Camrose when Plyuschev went ballistic several times behind the bench.
Posted by Dean Millard @ 10:40 PM

He almost lost the his team at the u18's in Fargo too.

This kid is the biggest spoiled brat in pro hockey today and if anyone thinks that these coaches are to blame then they are idiots too. From the first game the russians played they played like a bunch of lazy, entitled fools who lost because they didn't want to work, not because the coach lost the room.

This kid has done nothing but act like an entitled primadonna yet people continue to think that accomplished coaches like Hitchcock are supposed to bow down to him? His road to the NHL is via the Blue Jackets and if he wants to be an NHL player he should just shut his mouth and play.

Check the puck daddy interview where he states that he was ready to bail on the team after his 4th game (3 were road games and of the 4, three were season openers).

This kid came to the NHL expecting to be a star, realized early that it wasn't going to happen and he is using his coaches as a convenient excuse and dummies are falling for it hook line and sinker.

Howson made a monumental drafting error in choosing this idiot.

Their head coach's name is Vladimir Plyuschev, not Vladamir Plyuschkev ;)

I think the BJs should stay away from drafting Russians ie: Filatov, Zherdev