Recently the U.S. National development team handed out some discipline and one player has left the program.

Jacob Fallon, a 5.10 forward who had committed to Michigan for next season has left the program. According to a USA Hockey official Fallon left the team and program voluntarily. I've read some scouting reports that have compared him to Patrick Kane, however most rankings I've seen have him as a mid 3rd rounder right now. Fallon, who hails from Texas, was listed by the Seattle Thunderbirds. Fallon was reportedly not suspended, but chose to leave the program after speaking with the coaching staff. I'm just guessing here but it sounds like this could be the Seattle Thunderbirds gain. 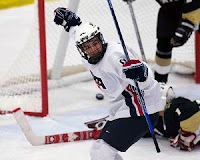 3 other players were suspended until January 31st for "a violation of team rules."They are Matt Nieto, a 5.11 forward who is highly ranked for the 2011 NHL draft and has verbally committed to Boston University. Nieto racked up 11 goals, 24 assists for 35 points in 38 games last year with the U-18 team as a late birthday 16 year old. This season he's spent most of his time with the Under 17 team and as 7 goals and 14 points in 11 games. Nieto is from Long Beach, California and his WHL rights belong to the Tri City Americans.

Kevin Clare is a blueliner who is also committed to Michigan, and was ranked 119th for the 2010 draft by International Scouting Services. He's a shade over 6.01 and hails from New York. Clare is supposed to make his Wolverine Debut next season. At 200 pounds and with little offensive statistics it looks like Clare is a stay at home rearguard, who was drafted out of the OHL by Erie.

Also handed a suspension was Jon Merrill, another defenceman. Merrill joined TPS in October, and you can hear that conversation by clicking here. Merrill is a steady stay at home blueliner, who is also slated to play at Michigan next year. That makes 3 of the 4 players who were either suspended or have left the program future Wolverines....if they keep their commitment.

We've seen players like Robbie Czarnik and Jack Campbell choose the OHL over Michigan, however some players do stick it out and go the college route after having problems with the USNDT. Kyle Palmieri was kicked off the U18 squad last year but remained in Ann Arbour, finished high school, enrolled at Notre Dame this year and was picked for the Gold Medal winning World Junior team.

There are a lot of rumours going around about what the team rule violations are, but I don't feel comfortable printing what I've heard until or if I get something substantial to back it up.

Nieto is on the u18 team and has never played a game with the u17 this year. Last year he was on the u17 team and called up to the u18 team helping them win a gold medal at the u18 world championships in Fargo.

Hi there, I only saw him listed for the U17 team. That was according to hockeydb.com as well the Tri City Americans who listed him, have him on the u17 team, but you seem to know more about the player then me.

The NTDP system is sort of confusing, but here's how it works:

-The portion based in Ann Arbor is split into a U17 and U18 team.

-HOWEVER, the U18 team plays a 60-game schedule in the USHL as 'Team USA U17 Juniors', in addition to the games they play as as part of the NTDP (ie college teams, international tournaments). The U17 team does the same thing, albeit in the NAHL.

HockeyDB is junk for NTDP statistics because they only count the games the U18 team plays in the USHL.

According to the USHL PR guy when we had him on the show, the U17 and U18 teams are sharing the USHL schedule. I do not believe that the US-NDTP is active in the NAHL anymore.

I could be wrong but that's what I got out of Brian Werger's comments when he was on the show, plus the NAHL website doesn't list them as a team.

You'll notice the roster for the NTDP at the USHL site is like 60 plyaers long, because it's 2 teams sharing one schedule.

I could be wrong.