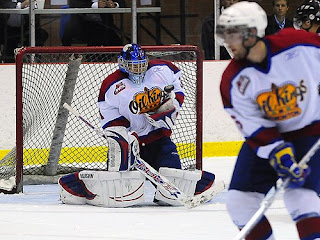 What happens when your team has 3 of the league's top 10 scorers, a defence that has played better than expected but your starting goalie has stats that would make a house league coach cringe?

If the Edmonton Oil Kings have any chance of making the WHL playoffs this year they are going to have to address their goaltending ASAP.

Starter Dalyn Flette struggled in the exhibition season and hasn't gotten any better a month into the 2008-09 campaingn and no matter how well the team in front of him has played, the Kings have slumped to the bottom of the Eastern Conference.

by comparison, 16-year-old rookie Cam Lanigan has factored into 4 games so far (not including today's game against Calgary) and has managed a 2.78 GAA and .912 sv% with wins in both games he started and a no decision on the one he was pulled in against Medicine Hat.

I don't know what goalies are out there but with the recent trades of Joe Caligiuri (PG), James Priestner (BRN), Torrie Jung (LETH) the pol of available keepers is definitely smaller than it was a couple of weeks ago.

The Regina Pats have been shopping Linden Rowat because they have a wealth of keepers but even though he's readily available, the Pats are asking a lot for the Eastern Conference top goalie in 2007-08.

I had a conversation with someone who follows the Oil Kings very closely, won't name him but he'll know I'm refering to him, who suggested Sherwood Park native Kurtis Mucha of the Portland Winter Hawks would be a good fit. Of course it all depends on what it would cost to get him but certainly a 19-year-old would be a solid bridge from today until Lanigan and Laurent Brossoit are ready to assume to full time duties. Mucha's stats are equally depressing to Flette's but it's believed that the Portland keeper would be much better if not for being mired on the worst team in the league.

Last year the Regina Pats had offered BCHL star netminder Damien Kelto to Edmonton for Robin Figren which didn't go through as the Swede wanted to stay with the Oil Kings. Kelto has a stats line of .928 sv%, 2.21 GAA and is 3-0 in his 3 games.

EDIT: Oil Kings were hammered 7-2 by the Calgary Hitmen on Sunday. I wasn't there so I can't speak to how Lanigan played. Edmonton has now allowed at least 5 goals against for 7 consecutive games.
Posted by Guy Flaming @ 2:56 PM

They should have open tryouts. I bet there are better amateur goalies just floating around the Edmonton area in beer leagues.

Lanigan was not good on Sunday. Not much help, but he looked like he belonged in my beer league more than the WHL.

Well, I guess I'll have to dust off my old pillowey Irbe pads and strut my stuff down to the Oil King headquarters for a tryout.

Any bets on how long it takes before they kick me out like that guy a couple years ago in Montreal? :-D