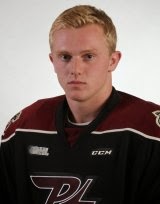 Another 2015 Draft eligible player has agreed to blog with us this year and it's out privilege to present to you his first entry.

After the jump, the first chapter in the draft season blog written by Matt Spencer.

My name is Matt Spencer and I am currently in my second season playing for the Peterborough Petes of the OHL.

I was born in Guelph Ontario and lived there for a short while before moving to Oakville Ontario with my family. To this day I consider Oakville my home, but have managed to maintain strong ties to the Guelph community.

My mother, Karen, and father, John, decided to move to Oakville for a number of reasons, however when contemplating the decision, I don’t think the thought of hockey was too prevalent in their minds. Although, if it weren’t for this change in scenery, I don’t think I would have ever been in the position I am today.

My father was a highly active athlete and lover of all sports, especially hockey. Although he didn’t “make it” in the hockey world, I am always pressed to find a reason why not. From the first time he laced me up with a pair of skates, I tried to emulate his abilities. My father was the first one to introduce me to the world of hockey and I have loved the game ever since. Being the son of a proud Leafs fan was not always the happiest of times, although I loved the game just the same and was determined to make the NHL one day.

My hockey career began at a young age playing for the Oakville Rangers of the OMHA. I was extremely happy to make the AAA rep team in my first year of Tyke and was even happier that I maintained this status all the way through until Minor Midget.

My first few years of minor hockey proved enjoyable, but not always fulfilling. We were not the greatest team in the league and by my third year of rep, playing for the Oakville Minor Atom team, we fell to being one of the worst teams in Ontario. This all changed however with the addition of 3 new coaches taking over the team. Duncan Harvey, his father Paul, and assistant coach Reggie Nsu, rebuilt our team from nothing to top 10 contenders in just 2 short years.

Through their extensive training methods, video sessions, and a variety of guest speakers, I believed that “this is what it must feel like to play in the NHL”. Without the help of my coaches, I would have never pursued my dreams to continue on with hockey.

Just a few years later, in what was eventually my last season of minor hockey, we had assembled the greatest team in Oakville’s history where I was fortunate enough to be named captain. During this year we managed to win three major tournaments including the Peterborough Fitzsimmons Tournament of Champions, the OMHA Championship, and most important the OHL Cup. It was an incredible year and one that I will surely never forget.

Soon after the conclusion of my minor midget season, the OHL Draft quickly came into the picture. I was drafted 3rd overall by the Petes and it was one of the happiest days of my life, although not just for me, but for many of my teammates. Twelve players from our team were selected in the OHL draft and one additional player in the QMJHL draft a few weeks later. It was a proud moment for our team and the city of Oakville.

After a summer of intense training, I made my way to Peterborough to begin my rookie season with the Petes. I was extremely nervous yet anxious to begin my first season. Being a 16-year old kid in a new town, with new people and living in a different house with a family you had just only met was extremely difficult to transition into. However I soon became comfortable with my surroundings and with the help of my new teammates, I was able to focus on hockey.

My rookie season was an up and down roller coaster of emotions but we soon found ourselves in a playoff position facing the Kingston Frontenac’s in the 1st round. After losing the first three games of the series, we rallied around each other and mounted one of the greatest comebacks in the history of major junior hockey in Peterborough. We managed to win the next three games in front of three wicked crowds and were set to play game seven in Kingston. It seemed fitting that a series of this length would extend to overtime, where a clutch goal by Nick Ritchie capped off the run. It was an indescribable feeling and one that will remain with me for a very long time.

Our efforts were soon trumped by a very strong Oshawa Generals team in the 2nd round and my rookie season was over.

With a rejuvenated attitude after a summer of hard work, I was excited to begin my second year playing for the Petes. Being that this will be my NHL Draft Year, I know that a wake of new experiences and lessons are yet to come and I hope to take each one in stride. It was evident that my rookie season went by much faster than I anticipated, so I am trying to enjoy every moment in my sophomore season.

Thank you for taking the time to learn a bit about myself and I hope to be posting again soon,

Matt Spencer is listed a 6'1.5 by NHL Central Scouting although the OHL website pegs him at 6'2. He had 15 points as a rookie with the Petes and as of this posting, Spencer had easily eclipsed those numbers with 5 goals and 23 points in 41 games. NHL Central Scouting's mid-term rankings showed Spencer in the 51st overall position.
Posted by Guy Flaming @ 5:00 AM