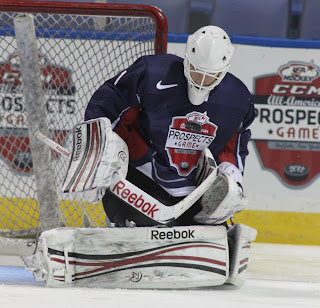 The Pipeline Show's annual series of blogs written by draft eligible players continues again with another chapter from one of the key goalies available in 2013.

The first chapter of Eamon McAdam's blog series this season arrived back on October 7th. Part 2 was posted at the tail end of November after striking gold at the 2012 World Junior A Challenge in Nova Scotia which you can read about HERE.

Recapping the last two months and the USHL Top Prospects Game, The Pipeline Show is pleased to be able to present the third blog entry from Waterloo Black Hawks goaltender Eamon McAdam.


Back again for my third entry.

This entry I will be talking about the USHL/NHL Prospect Game in Muskegon, Michigan a few weeks ago.

This game was a lot less stressful for me and my team mates than the previous prospect game we did, the All-American Prospect Game, in Buffalo, New York, that I wrote about in my first blog.  It was a lot easier to travel to and from since the league ran it and they scheduled it during the week, so we wouldn’t have to run cross-country to get to it after a game or before one.

With all the skilled players we have here in Waterloo this year, we had five players going to the game in Muskegon.  We had our assistant coach drive us all to the Chicago Airport on Tuesday, where we met up with a bunch of other players from various teams who were waiting for the flight to Muskegon.  We flew into what seemed like a blizzard for a Pennsylvania native that had never seen lake effect snow that did not stop until two days later when we were leaving.  The locals were very welcoming in the very scenic but spread out lake front town of Muskegon.  We got back to the hotel that night and took our time going to get something to eat and then shut it down for the night.

The next day both teams had a pre-game skate in the morning to get our legs under us and for the forwards and defensemen to get used to each other at least a little bit before the game.  After the skate the USHL wanted to get an interview of a different kind with Cal and I.  They figured since our situation is a little bit unique with two goalies on the same team competing not only for the starting job but also for a higher rank in Central Scouting and the upcoming draft, that they would have us interview each other.

It was a fun and different experience for both of us with a few lighthearted jokes thrown back and forth.  By the last question Cal asked me if I would be “live-tweeting” during the game that night which got some laughs out of the people in the room.

After the interview Cal and I went back to the hotel for some lunch and a pregame nap.  It was nice having Cal as my roommate since we already knew each other’s routines and there were no conflicts that other guys might have had while rooming with someone they had never met before.  We got our suits on and went down to the lobby of the hotel about ten minutes early to wait for the trolley and it was pretty cool for me to see guys like Mike Downing and Alex Kile who I hadn’t seen since we won the gold medal together up in Nova Scotia.  We all had a few good laughs before we split into our teams and headed to the rink.

It was cool to see, at least on Team West, how in the pre game warm-up and on the ice that guys who would be battling against each other that weekend and for the rest of the season put aside their differences and just played the game with each other.

Cal and I couldn’t decide who was going to start so we had a coin toss that morning at breakfast that I won.  The action was relatively light for my period and a half of the game and I only racked up eleven shots against and saves total.  The shining moment in the game for me was when Team East was on the power play and hit a guy back door and I made a sprawling glove save.  The play went on to make ESPN Top Ten, which was pretty cool for me since it was a show I watched growing up and always imagined myself making the count down.

When we were in the locker room after the second period the USHL media guy came in and asked me if I actually wanted to live tweet the game like Cal had jokingly asked earlier in the interview.  So for the third period I gave live updates of the game via twitter to anyone who was following which was a fun and different experience for me once again.

Cal got bombarded in the third and racked up 21 shots and gave up one goal making it a close game to the end, but we (Team West) ended up pulling out the win in the end.  I was awarded MVP for my team for the game, which was an honor seeing as I had only played half of the game.  After the game we packed up and headed back to the hotel to rest up for our travel day on Thursday.

We flew out the next day from Grand Rapids, Michigan to Chicago and then connected to Des Moines where the team bus picked us up for our road trip to Nebraska that weekend.  Overall it was a good experience for me and I have been playing well ever since.  The level of play was pretty high and was well worth the travel in my eyes.  Both this game and the All-American Prospect Game had many ups and only a few downs but the lack of crammed travel in the USHL/NHL game made it my favorite of the two.


That’s all for now.. I’m off to prepare for a huge weekend; we play Sioux Falls and Dubuque, the top two teams in the league, and both games are away.  It should be a fun one to get everyone excited for the final push here before playoffs.

Eamon McAdam is a goaltender with the Waterloo Black Hawks of the USHL. He is listed by NHL Central Scouting as 6'2, 185 lbs and is ranked 7th amongst goaltenders from North America. Already this season he has helped Waterloo earn a silver medal at the Junior Club World Cup in Russia, backstopped USA to a gold at the World Junior A Challenge in Yarmouth, NS., and was named MVP of the USHL Top Prospects Game.