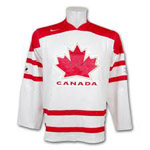 Now that we know who will be trying out we can start to narrow our look at the team that will be charged with ending Canada's gold medal drought.  The Canadian national anthem hasn't been heard following the final game since Jordan Eberle's heroics in 2009.  Eberle, now an Oiler will watch a current teammate lead the way this year.

As always this is pre tournament and I'm assuming everything is equal. Health especially, and obviously how these guys play at camp is the biggest determining factor for most players, but here goes, this is who would be on MY team.

FYI, Shinkaruk and head coach Steve Spott will join Guy and I Tuesday night on TPS.  drop us a line with a question, pipeup@theteam1260.com.