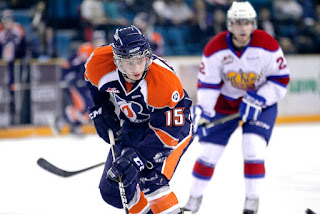 Yesterday we released our Eastern Conference preview and predictions and the Oil Kings and Kootenay kicked off the 2012-2013 WHL season. Now it's time for the Western Conference and who we think ultimately beats who for the Ed Chynoweth Cup.

Once again our predictions of standings, MVP, top scorer - defenceman - goalie, rookie, coach and GM of the year.

A lot like the Edmonton Oil Kings Portland is reloading and will take another run at the Ed Chynoweth Cup.  Ty Rattie is the main man now with Sven Bartschi moving on to the AHL.  Danish water bug Oliver Bjorkstrand has the pleasure of trying to replace some of the 116 points, but he'll have a solid supporting cast including Derrick Pouliot, Seth Jones and Troy Rutkowski who will be playing for a contract after the Avs didn't sign him.  Brendan Burke is the last line of defence with 20 year old Cam Lanigan backing him up most nights.

They went on a tear last year posting 47 wins and a lot of their forwards from that team are back.  Brendan Ranford has the potential to reach the 100 point plateau and Tim Bozon could be a force in the western conference.  Matt Needham will be counted on as well in his draft year.  Cole Cheveldave is rock solid in net and Marek Hrbas will anchor the blueline.

The older vets that led this team are gone and it's up to a new group of vets to continue the charge, but it'll be a youngster who stands out the most.  Eric Comrie could have a monster year as the Americans return 6 blue liners and already play a tight game in their own end.  Justin Feser had a strong pre season with 7 points in 5 games and will be the biggest weapon offensively.

The Chiefs have one of the most well respected coaches in the league, and there's a reason Don Nachbaur has that reputation. His teams win and make the playoffs.  This year he'll be leaning on Mitch Homberg a lot.  The Sherwood Park sniper scored 38 goals counting his 11 playoff tallies last year, and should be able to reach for the 40 goal mark in the regular season alone this year.  A lot of Spokane's success hangs on whether or not Brendan Kitchon returns on the back end. He led them in scoring and was the Western Conference's top defenceman.

17 year old Tyson Ballie led the team in the pre season.  If that happens during the regular season the Rockets could bin trouble.  Ballie will be counted on for offence, but the bulk of it will be from Colton Sissons.  Madison Bowey will be a fun player to watch develop in the valley.

The super star forward isn't there, but scoring depth is and a good coach like Don Hay will be able to mold his Giants into a playoff team. Their undoing could be goaltending though as they've gone through quite a few goalie jerseys out west.

The longer the NHL lock out is, the better off the Everett Silvertips are. They get star blue liner Ryan Murray until the PA and owners can figure it out, and if it were me, I'd let him stay the whole year.  Murray can help set the pace for the rest of the team in case he's gone - which will surely happen.  Rookie Ty Mappin could surprise a lot of Silvertip fans and be a steady contributor on offence.

Like Curtis Lazar in Edmonton it's a huge year for Alex Forsberg.  Not only will he be counted on to provide a lot of offence, but it's his draft year.  Doing one well will take care of the other.  PG picked up Collin Jacobs for Forsberg's older brother Jesse and if healthy Jacobs and Forsberg could be a deadly combination.  Troy Bourke provides some nice secondary scoring.  Rookie Brett Zarowny could end up being the main man in net for the Cougars this season.

Next year land for Seattle and Victoria.