Source: Domi To Be Dealt 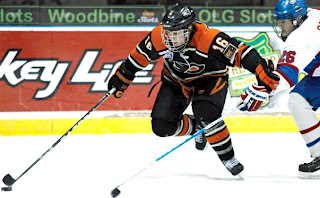 A source has told TPS that a deal is close to being done that would see Max Domi dealt from Kingston to the London Knights of the OHL.


The Frontenacs took Domi 8th overall last Saturday in the OHL priority draft, despite the fact the Domi camp (former NHLer Tie) had warned teams he was likely heading the NCAA route, specifically Michigan. Despite the fact there is a major Leaf connection in Kingston with Doug Gilmour as G.M. and Todd Gill has Head Coach it wasn't enough to sway the younger Domi to the Frontenacs.

But what about London?

I find it hard to believe that London G.M. Mark Hunter would give up valuable second round picks without knowing that Domi had committed to the Kinghts.

Simmons also wrote an article in March about the situation.

Another source told us that there is another first round pick in the OHL draft that will likely be on the move as well.
Posted by Dean Millard @ 12:07 PM